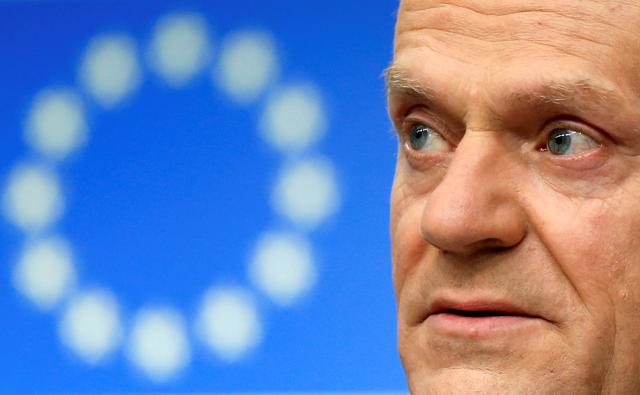 When asked if this would be looked upon favourably, Mr Tusk said, "emotionally I have no doubt that everyone will be enthusiastic".

It came as other European leaders expressed sadness at the UK leaving the EU.

French President Emmanuel Macron said he was "deeply sad" while the EU's Guy Verhofstadt pledged to try and "ensure the EU is a project you'll want to be a part of again".

But Mr Tusk warned that any future entry bid on the part of an independent Scotland would not be automatically accepted.

The UK government does not support Scottish government calls for another independence referendum or rejoining the EU in any form.

Britain officially left the European Union on Friday at 23:00 GMT after 47 years of membership, and more than three years after it voted to do so in a referendum.

Mr Tusk, who served as European Council president for five years until November last year, was speaking in a BBC interview to be aired on The Andrew Marr Show.

When asked about the prospect of an independent Scotland joining the EU, the Polish politician said "I want to stop myself from saying something too blunt".

He said that he feels "very Scottish, especially after Brexit".

However, he added he had to "respect the internal debate in the United Kingdom" and it was not his role to intervene.

But when pressed on the level of support in the EU towards an independent Scotland joining the union, he said: "Emotionally I have no doubt that everyone will be enthusiastic here in Brussels, and more generally in Europe.

"If you ask me about our emotions, you will witness I think always empathy."

Mr Tusk also said "formalities" and treaty agreements would still need to be adhered to.

His comments come two days after the UK officially left the European Union, despite Scottish voters backing Remain by 62% to 38% in the EU referendum.

In a speech on Brexit day, Nicola Sturgeon said there was "real and profound sadness" felt by many Scots, also tinged with anger.

An independent Scotland would require the backing of all 27 EU members to join the trading bloc and there are a number of countries which have already applied and started accession negotiations.

The European Policy Centre think-tank, of which Mr Van Rompuy is president, last year published an analysis on independent Scottish membership of the EU.

It concluded that the EU should "engage positively" with Scotland in the event of independence, if there had been a properly constituted referendum.

But it said Scotland could not expect "special treatment" and that the Scottish government would have to accept all the obligations of membership, including agreeing in principle to join the euro.