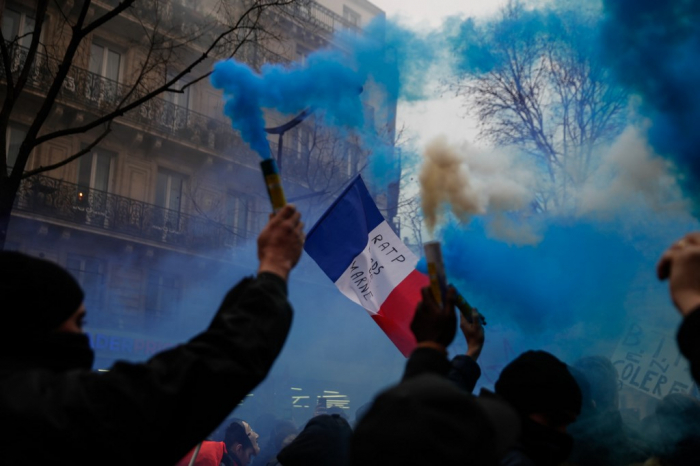 In a country with 42 different pension schemes and deep-seated stakes in maintaining the status quo, it is no surprise that a proposed overhaul of the French retirement system would be met with strong public resistance. And yet, reform is both necessary and inevitable, given France's demographic realities.

A year after a proposed fuel tax triggered the gilets jaunes (yellow vest) protests, France faces another crisis, this time over pension reform. Mass demonstrations have now gone on for more than 50 days, not letting up even for Christmas and New Year’s Eve. Strikes have disrupted the operations of both the French National Railway Company (SNCF) and the RATP bus and subway network, leading to more than €1 billion ($1.1 billion) in losses for those companies. The strike in the transportation system has now ended, but the confrontation is far from over.

French President Emmanuel Macron’s proposed pension reforms are both far-reaching and needed. Under the current mandatory-pension system, the accounting schemes for determining benefits are all over the map, differing substantially by sector and occupation. The system is the outcome of a long-going historical process aimed at extending social protections in old age, based on the prevailing principles of the immediate post-World War II era.

The Macron government’s proposals are bold. But they are not intended to disrupt pay-as-you-go schemes, nor do they undermine the broader principle of intergenerational solidarity. The total pension payments for a given year will still be financed by social-security contributions from active workers’ earnings in the same year. The legal minimum retirement age of 62, most recently set in 2010, will remain for now. And the new system will still cost around 14% of GDP (which is much higher than in most other European countries).

But Macron’s proposals for a “systemic” overhaul are entirely different from previous reforms, the main goal of which was to balance the books by tweaking certain “parameters” across the 42 existing pension schemes. The new program would create a universal system in which, as Macron stated, “a contribution of one euro will give the same rights to all.” The same rules would apply to all working individuals, whatever their profession or employment status. And the contribution rate would stay the same for total earnings up to €120,000 per year, providing a €1,000 minimum monthly pension benefit for those who spent their careers at the minimum wage.

Clearly, the reform would require the gradual elimination of special pension plans, which currently allow some railway employees to retire ten years earlier than most other workers. The government has stood firm on phasing out privileged schemes in the name of equality; but it has agreed to a very gradual transition, such that 60% of current eligible employees would not be affected.

It is generally agreed that a points-based scheme is the most transparent option, because benefits follow directly from contributions, which is not always the case with basic annuity schemes. As such, the system enhances job mobility, and is more in step with workplace realities. By assigning additional points, the government can encourage a more seamless integration of other redistributive arrangements such as child credits, unemployment benefits, or minimum monthly pensions.

But reforming how benefits are calculated will change the entitlements that some beneficiaries receive. There are still questions about which groups will be most affected, and how, and this has contributed to the general climate of distrust. Not surprisingly, those benefiting from privileged schemes are standing tall on the picket lines. But many civil servants – not least schoolteachers – will also be affected, because their benefits will be determined by average lifetime pay instead of their earnings upon retirement.

Moreover, French Prime Minister Édouard Philippe has made the pill harder to swallow by insisting that the reform package include a new “equilibrium age” of 64 (to be reached in 2027), which would reduce benefits for people who retire early, and increase benefits for those who postpone retirement. Philippe is correctly concerned about the financial sustainability of the whole system. But by pushing for this measure, he appeared to break an earlier promise by Macron that the retirement age would remain 62. As a result, the French Democratic Confederation of Labor (CFDT), the main reformist union, turned on the government, forcing another round of negotiations. Philippe eventually withdrew his proposal, provided that a special conference addresses the financial issue within a period of three months.

The challenge now is clear. Without budging on the principles of universality and equality, the government needs to undermine opposition to the broader reform package. On the issue of the transition period, it has stated that the new provisions will apply only to workers born in or after 1975. It has also agreed to exceptions for early retirements linked to arduous and hazardous working conditions, and it may offer some additional compensation for teachers and a few other groups. None of these changes will make the reform program simpler; but they are necessary.

The larger crisis over pension reform reflects longstanding divisions in French society. The current conflict has featured the usual confrontation between those responsible for reforming existing institutions and those fighting to preserve their vested rights. It has also exposed a rift on the left, between unions that reject the reform proposals outright and unions that are open to negotiation.

The more radical unions see the fight as part of a broader ideological struggle against economic neoliberalism; accordingly, they suspect that the Macron government is pursuing a funded system. The more moderate unions acknowledge (albeit not publicly) that demographic realities – longer life expectancies, declining birth rates – require a higher retirement age.

Public opinion reflects these divisions. The public supports the principle of equality, but is suspicious of the proposed changes. Because so many French citizens have a stake in preserving the status quo, the strikers have enjoyed somewhat strong public support. Looking ahead, the government has been waiting for commuters and others who rely on public transportation to lose patience with service disruptions. Strikes cannot continue forever.

At the end of the day, the government has a parliamentary majority with which to pass a reform package, possibly one that includes a few concessions that will reduce its overall consistency. Having campaigned on the promise of reform, Macron cannot afford to abandon the effort now. Nor can France.


Raphaël Hadas-Lebel, author of Hundred and One Words about the French Democracy, is a former president of the Conseil d'État (State Council) Social Section and chaired the Conseil d’orientation des retraites (Pensions Advisory Council) from 2006 to 2015.