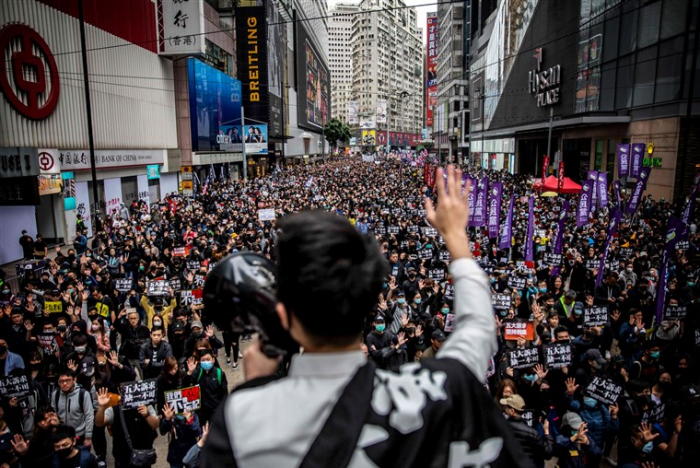 What began in early 2019 as peaceful marches against a bill to allow extraditions to mainland China exploded by mid-year into a direct challenge to Beijing’s grip on Hong Kong that has carried into 2020. The local government eventually withdrew the legislation but calls for greater democracy gained impetus. Violence erupted in the streets, subways and airport, while clashes between riot police and black-clad protesters hurling Molotov cocktails resulted in clouds of tear gas and more than 7,000 arrests. Some protesters were shot by police. Chinese President Xi Jinping, who has long warned that challenges to China’s rule won’t be tolerated, said “restoring order is Hong Kong’s most important task.”

Yes, but officially it’s a “special administrative region.” The city of 7.5 million people was an outpost of the British Empire for 156 years, during which time it developed into a global business hub. In a 1984 joint declaration, the British agreed to give it back in 1997 and China promised to allow a “high degree of autonomy” for 50 years -- until 2047 -- including guarantees of free speech and a free press, capitalist markets and English common law under a “one country, two systems” arrangement.

2. Why are people protesting?

The extradition bill, introduced in February 2019, was suspended in June but Hong Kong Chief Executive Carrie Lam waited another two months to formally withdraw it. During that time, the list of grievances grew along with calls for Lam’s resignation. Many protesters chant the motto: “Five demands, not one less!” Those are:
• Withdrawal of the extradition bill (done)
• An independent inquiry into police conduct and allegations of excessive use of force
• Amnesty for arrested protesters, more than 500 of whom are facing as many as 10 years in prison on a colonial-era rioting charge
• A halt to characterizing the protests as riots

• In June, hundreds of thousands of people turned out for peaceful marches which then devolved into weekly, sometimes nightly pop-up street battles. The airport imposed an unprecedented shutdown in early August after protesters occupied the main terminal.
• The entire subway network closed for a day in October (the first time since a railway merger in 2007) after a night of rampages followed a government decision to ban masks using a colonial-era law. (The ban was widely ignored, overturned in court and is now going through an appeals process.)

• Two deaths stoked emotions: a college student who fell in a parking garage, and an elderly street cleaner hit on the head by an object thrown by a protester.
• Gruesome smartphone videos of police shootings or attacks on Chinese mainlanders or government supporters went viral.
• In mid-November the Central business district and university campuses became flashpoints, heightening the sense of chaos.
• Politicians in both camps were physically attacked ahead of Nov. 24 district council elections, but the voting unfolded without violence; in a record turnout, pro-democracy candidates won in a landslide.
• Three weeks later, hundreds of thousands of people turned out for another peaceful march, demonstrating the movement’s staying power. But another one on New Year’s Day ended abruptly amid renewed clashes and 464 arrests.

4. What about this year?

The Lunar New Year holiday and the spread of a new coronavirus from China put a damper on major protests, but activists say they expect dissatisfaction with the government’s response to the epidemic to fuel their movement. New trade unions that grew out of the protests have added to pressure on the government.

5. What is China’s position?

Xi has consistently backed Lam’s leadership. But in January, China’s top liaison in the city was unceremoniously ousted and replaced with Luo Huining, a Communist Party stalwart with a reputation as an enforcer, in a possible sign of growing frustration with the situation. Xi again expressed concern for Hong Kong in his New Year’s address. Earlier he talked about “radical violent crimes” that “have seriously trampled on the rule of law and social order, seriously undermined Hong Kong’s prosperity and stability, and seriously challenged the bottom line” of ‘one country, two systems.’ Chinese officials and media have called protesters terrorists and compared them to Islamic State. They also have made charges of foreign interference, describing the U.S. as a “black hand” behind the protests -- a claim the State Department has dismissed as “ridiculous.” China’s Communist Party has signaled even more intervention in everything from education to the chief executive’s appointment, but hasn’t detailed specific measures.
AD

6. What does Hong Kong’s government say?

“Violence is destroying Hong Kong,” Lam said in October when she invoked the emergency law -- while insisting there was no state of emergency. She has accepted blame for the unrest, but rejected calls to resign. Lam also has ruled out a blanket amnesty -- “you have to take the consequences after breaking the law” -- and says complaints about police conduct should be handled by an existing commission (United Nations reports have questioned its investigative powers and independence, and a panel of international advisers withdrew in December, citing similar concerns). Lam has said “different constraints and circumstances” prevented her from addressing “all the grievances of people in society.”

That depends on China. Troops from its People’s Liberation Army have been in the city since the 1997 handover, but have played a minimal role. Concern has grown that soldiers might be called on to restore order, especially after the garrison posted a video in August showing Chinese troops practicing riot control. Neither the Ministry of National Defense nor the Hong Kong and Macau Affairs Office in Beijing have ruled it out. For some people, the greatest fear is of a crackdown mirroring the deadly one three decades ago on mostly student protesters in Tiananmen Square. That concern is followed by worries of a withdrawal by the U.S. of the special status under which it agreed to treat Hong Kong as distinct from China for trade and economic matters. To the dismay of China’s leaders, President Donald Trump signed a bill into law expressing U.S. support for the protesters in November.
AD

8. Have the protests affected business?

Yes, and the coronavirus outbreak is making it even worse. The economy was already under pressure from the U.S.-China trade war, and the government is forecasting the first annual recession in a decade. Tourists are staying away in droves -- arrivals were down 56% in November compared with the same month in 2018. Hotel occupancy rates are way down too. Sales in the retail sector have been tumbling for months, down about a quarter year on year in November after a record drop in October. Sentiment among small businesses and purchasing managers were close to record lows, while the real estate and financial services sectors have remained fairly resilient. Canceled events include a major airline conference, the WTA Hong Kong Tennis Open, music festivals, fireworks, parades, a motor race and a one-month run of “Matilda The Musical.” Hong Kong Disneyland has also suffered. The epidemic has led to more cancellations, including the annual Art Basel Hong Kong show.

9. Have protests worked before?

Yes, but less so lately. In 2003 demonstrations blocked a proposed national security law and contributed to the resignation of then-Chief Executive Tung Chee-hwa. Nine years later, high school students and parents’ and teachers’ groups thwarted the Hong Kong government’s attempt to introduce a course lauding the Communist Party and criticizing democracy. But the pro-democracy movement fractured after the government successfully faced down student-led demonstrators who occupied city streets for 79 days in 2014 to demand more democracy. Since then, China has barred some activists from seeking elected office, prosecuted protest leaders and banned a pro-independence political party.
10. What was wrong with the extradition bill?

Lam cited the case of a Hong Kong man suspected of murder in Taiwan in proposing it. Opponents said it could open the door for anyone who runs afoul of the Chinese government -- including political dissidents, civil rights activists, or even foreigners passing through -- to be arrested on trumped-up charges in Hong Kong and sent to the mainland. There they would face what the U.S. State Department called China’s “capricious legal system.” Critics noted the draft bill assigned to the city’s chief executive -- chosen by a committee stacked with Chinese government supporters -- the leading role in handling extradition requests; currently the legislature can block extraditions.
AD

11. Are there other potential flash points?

Hong Kong still has to enact national security legislation. Lam has said she wants to create a “favorable social environment” before reintroducing it. Hong Kong is also considering making disrespecting the Chinese national anthem a crime, with prison sentences of as long as three years. And there were protests in 2018 after Lam outlined a project to build artificial islands between Hong Kong island and Lantau to the west. Detractors object to the huge cost and environmental impact. The islands would help accommodate a continuing influx of mainland Chinese, whom many Hong Kong residents blame for sky-high property prices and overcrowded public hospitals -- exacerbating anti-Beijing sentiment.

Iain Marlow is a correspondent for Bloomberg News in Hong Kong.