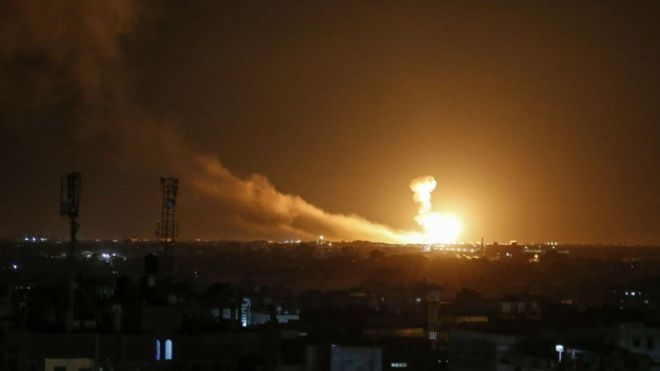 The Israeli military says it has launched airstrikes against a Palestinian militant group in Gaza and Syria in response to rocket fire.

Israel's military said it had struck Islamic Jihad targets in southern Damascus and the Gaza Strip on Sunday.

In a rare acknowledgement of a strike on Syria, the Israeli military said it targeted "a hub of Islamic Jihad's activity".

Syria said its air defences shot down most of the Israeli missiles.

Four people were wounded in Gaza, health officials say, but there have been no immediate reports of fatalities from the Israeli strikes.

The strikes were launched after southern Israel was hit by a barrage of at least 20 rockets fired from the Gaza Strip earlier on Sunday. There were no reports of casualties.

The hostilities began on Sunday morning when Israel said it killed an Islamic Jihad member along its border fence with the Gaza Strip.

Israel's military said the man was attempting to plant an explosive device.

A video shared widely on social media showed an Israeli bulldozer scooping up the body of the man, provoking anger among Palestinians.

Some Palestinians called for retaliation and hours later, rockets were fired from the Gaza Strip, setting off air raid sirens.

Islamic Jihad claimed responsibility for the rockets, calling them a response to the killing of one its fighters along the Gaza border.

Islamic Jihad, which is backed by Iran, is one of the strongest militant groups in Gaza. Allied with Hamas, it has fought in a number of wars against Israel in recent decades.

Violence between Israel and Islamic Jihad flared up last November when an Israeli airstrike killed a senior commander of the militant group in Gaza.

Clashes between Israeli forces and Palestinians were seen earlier this month too, days after US President Donald Trump unveiled his peace plan.