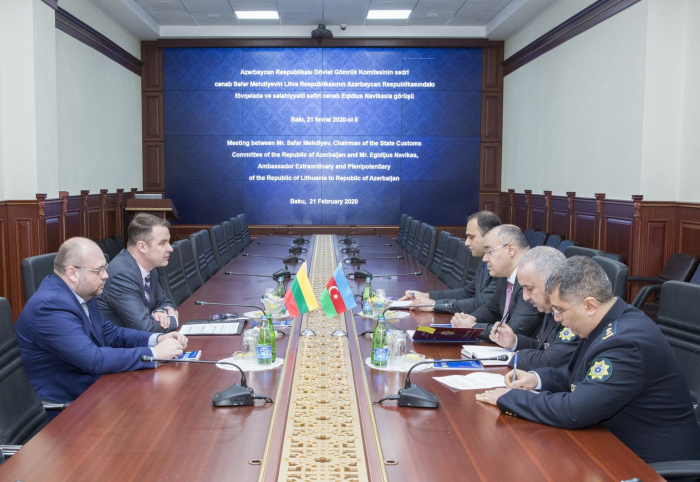 Representatives of the Azerbaijani and Lithuanian customs services have discussed prospects for the development of relations,  AzVision.az reports with reference to Azerbaijan’s State Customs Committee.

Chairman of Azerbaijan’s State Customs Committee, Colonel General of the Customs Service Safar Mehdiyev noted during a meeting held with Lithuanian Ambassador to Azerbaijan Egidijus Navikas that relations between the two countries cover all spheres.

Safar Mehdiyev informed the ambassador about the reforms carried out under the leadership of Azerbaijani President Ilham Aliyev in all areas, including the customs system.

The colonel general noted that the applied innovations, along with the development of Azerbaijan’s export potential, simplification of customs processes, ensuring transparency, create favorable conditions for easy and quick implementation of international trade.

It was noted that the goal of structural and personnel reforms in the customs sphere is to create a flexible and dynamic customs service with the involvement of professional personnel.

Egidijus Navikas expressed his country’s interest in cooperation with Azerbaijan in all areas.

Speaking about the pace of development of customs relations between the two countries, the ambassador touched upon prospects in this area.

Navikas said that he will continue to make every effort to further strengthen the interaction between the Azerbaijani and Lithuanian customs services.