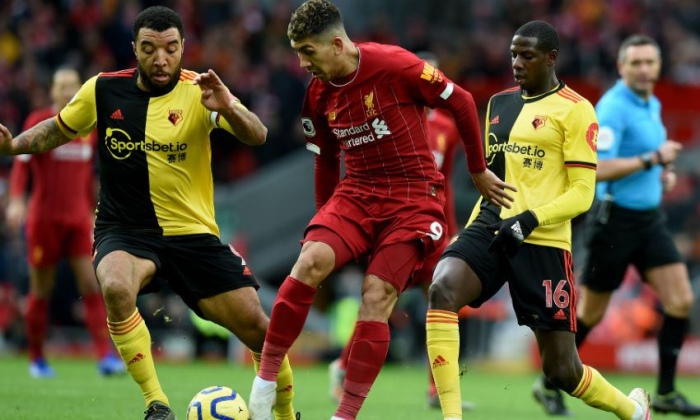 Ismaila Sarr inspired the extraordinary upset, stunning off-key Liverpool with two goals in six second-half minutes before setting up captain Troy Deeney with a third for the team who had started the day one from bottom, 55 points behind the runaway leaders.

Liverpool’s first league defeat of the season in their 28th match meant the end of their hopes of going the whole league campaign unbeaten as the new ‘Invincibles’ and of emulating Arsenal’s feat of 2003-04 and Preston North End’s in 1888-89.

It also concluded their run of 44 league matches without defeat stretching back to January 2019 and came on the day they were expected to surpass champions Manchester City by creating a new English top-flight record of 19 successive league victories.

The setback will doubtless not stop Juergen Klopp’s men going on to lift their first English title for 30 years as they remain 22 points ahead of their nearest pursuers City, who have a game in hand.

Yet their season’s aura of domestic invincibility was demolished on Saturday.

“Our best performance by a country mile. No-one give us a prayer or a hope for this one,” said Deeney, who praised man-of-the-match Sarr as an “unbelievable player, unbelievable talent”.

Klopp had no complaints. “They did exactly what they wanted to do, we did not. That’s how football works,” shrugged the German. “You have to accept it, it’s not so easy, but we were not good enough tonight.”

Liverpool had previously dropped only two points in the league this season — their draw at Manchester United in October — but from the start, Watford attacked them with a vigour that belied their struggles in the league.

Watford, who had not won any of their previous five league games, quickly looked the more likely to break the deadlock in the first half, with Gerard Deulofeu proving Liverpool’s main tormentor before he was stretchered off with a knee injury that manager Nigel Pearson described as “bad”.

Yet it was only when the Senegalese winger Sarr struck twice just before the hour mark that the Hornets dared to dream.

First he poked home from close range after Liverpool had failed to deal with a throw-in and then, after Will Hughes had set up an attack with a neat backheel, he powered forward and lifted the ball over the advancing Alisson.

Sarr then completed his fairytale day by latching on to Trent Alexander-Arnold’s poor back pass and setting up Deeney, although he did miss a good chance to complete his hat-trick.

Liverpool never gave up and Adam Lallana hit the post with one thumping drive but, for the first time in the league this season, they had been thoroughly outplayed, as Klopp acknowledged with his generous on-field congratulations to his opponents.

“If you win good, if you lose, try to do it in the right manner and do it like a man,” Klopp said.

For Watford, these were crucial points, as Pearson’s men moved out of the bottom three on goal difference into 17th place.

“I think that performance surpassed everything else we’ve delivered so far. You’ve got to earn the right to beat a side as good as Liverpool,” said Pearson.

As for Liverpool’s setback, captain Virgil van Dijk told the BBC: “Losing hurts, the records are only for the media, we didn’t mention it once.

“We keep going. We want to win the next game in the FA Cup and then in the league against Bournemouth, that’s the only way forward.”