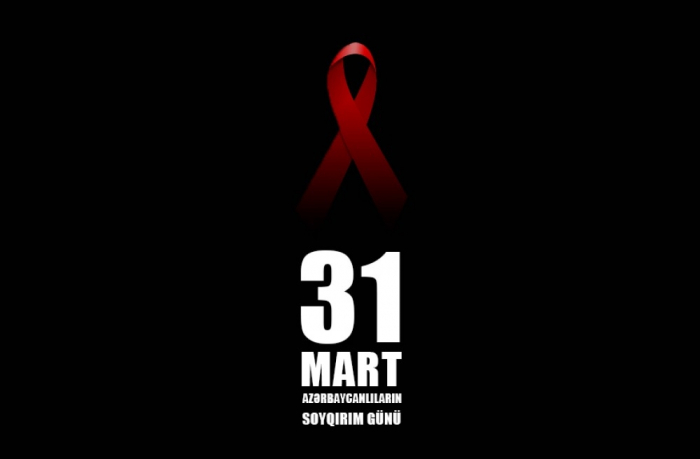 Azerbaijani Commissioner for Human Rights (ombudsperson) Sabina Aliyeva has issued a statement on March 31- Day of Genocide of Azerbaijanis.

The statement reads: “March 31 - Genocide of Azerbaijanis should be particularly emphasized due to its large scale among the other acts of genocide committed by the Armenian nationalists against our people as a part of their policy of occupation, ethnic cleansing and genocides throughout the history. The Armenian vandals committed inhuman crimes as a result of bloody acts started with the first shootings on Muslims by Dashnak groups gathered near the Armenian church in Baku on March 30, 1918, and the attacks on the “Kerpichkhana” (Brick houses), “Mammadli” and other dwelling neighborhoods of Azerbaijanis by the Bolshevik-Dashnak groups committed a day after.

The Armenians committed the acts of genocide also in Guba, Shamakhi, Kurdamir, Salyan and Lenkaran provinces along with Baku. As a whole, on March 31 and April 1-2, 1918, massacres in Baku, as well as other cities and provinces, which were included into the Baku governorate, occurred on a large scale, where Armenian groups have killed more than 50,000 civilians. During those bloody events, the demolishing and burning of 110 villages in Shamakhi, 167 in Guba, over 150 in Karabakh, 115 in Zangazur provinces, and 98 in Kars oblast, plundering of numerous homes, killing of hundreds of innocent people, including women and children, are concrete facts and truth of bitter history that reflect the policy of the Armenian nationalists against our people. 199 villages in and around the Iravan city, as a part of historical lands of Azerbaijan, have been ruined; 132,000 Azerbaijanis have been mercilessly murdered.

Also, the burning of secondary schools, libraries, cultural centers, and “Ismailiyya” as one of the most beautiful architectural monuments of Baku and the demolishing of the “Achig Soez” (Free word), the editorial offices of “Kaspi” and “Baku” Newspapers, and minarets of Taza Pir mosque, belonging to Azerbaijanis are another example of the Armenian vandalism.

The criminal acts committed by the Armenians in 1918, are engraved in the blood memory of the Azerbaijani people forever. The Decree on the Genocide of Azerbaijanis of March 26, 1998, signed by President Heydar Aliyev, politically assessed those horrible events and March 31 was declared “The Day of Genocide of Azerbaijanis”, which has been mourning every year at the state level.

As a result of conducted investigations, there have been collected numerous documents, and revealed the facts of mass killings committed by the Armenians during the 1918 incidents in Guba. The Guba Genocide Memorial Complex, created as a tribute to the memory of the murdered, displays visual evidences confirming the brutality of the Armenian murderers.

The atrocities committed by Armenian bandit attacks in 1918 against civilians in almost all parts of Azerbaijan are merely a crime of genocide. Thousands of peaceful Azerbaijanis were murdered just because of their ethnicity. The UN General Assembly Resolution 96 (I) of December 11, 1946 states that genocide is denial of the right to existence of entire human groups, as homicide is the denial of the right to live of individual human beings. The signs of a crime of genocide are enshrined in the Convention on the Prevention and Punishment of the Crime of Genocide, adopted by UN General Assembly Resolution 260 (III) of December 9, 1948. According to the Convention, genocide means any act committed with intent to destroy, in whole or in part, a national, ethnical, racial or religious group. Each of the acts, that were stated in this document, was committed by the Armenians against the Azerbaijanis during March-April 1918, which should be recognized as a genocide in accordance with international law norms and principles.

Historical facts show that the murder and genocide of Azerbaijanis by Armenians, as well as aggressive claims of Armenian nationalists also continued subsequently. As such, in Azerbaijan 48.000 Azerbaijanis were killed by the Armenians from May 1920 to November 1921.

Since 1988, Armenian nationalists again have become active. With the consent of the USSR administration, Armenia put forward territorial claims against Azerbaijan, started its occupation policy, committed crimes of genocide, and the harsh consequences of that military aggression continue to this day.

The ethnic cleansing and occupation policy of Armenia resulted in occupation of 20 percent of the territory of Azerbaijan, more than one million Azerbaijanis became refugees and internally displaced persons (IDPs), all fundamental rights of them were massively and severely violated. Over the night from February25-26, 1992, Armenian armed forces committed one of the most terrible acts of genocide of the 20th century against the Azerbaijanis in Khojaly and razed the town to the ground. The Armenian nationalists and terrorists committed acts of genocide and massacres in Karkijahan, Malibayli, Gushchular, Garadagly, Agdaban villages and other settlements, along with Khojaly.

Based on the international law norms and principles, we call the international community to recognize March 31 -Genocide of Azerbaijanis and to demonstrate a resolute and fair position. This should be imposed sanctions on Armenia that keeps the Azerbaijani lands, recognized by the UN, under the occupation and committed numerous acts of genocide pursuing an aggressive policy against the Azerbaijanis; the territorial integrity of Azerbaijan, violated fundamental rights of the refugees and IDP compatriots shall be restored; perpetrators, who murdered civilian population, shall be brought to justice as soon as possible and subjected to deserved punishment.”

This statement is addressed to the UN Secretary-General, UN Security Council, UN Office of High Commissioner for Human Rights, UN Office of High Commissioner for Refugees, UN Human Rights Council, the United Nations Children’s Fund, the United Nations Educational, Scientific and Cultural Organization, European Union, Council of Europe, Organization for Security and Co-operation in Europe, International and European Ombudsman Institutes, Asian Ombudsman Association, Organization of Islamic Cooperation and the Ombudsman Association of its member states, Independent Permanent Human Rights Commission of the Organization of Islamic Cooperation, European Network of Ombudspersons for Children, International Peace Bureau, different ombudsmen and national human rights institutions, embassies of the Republic of Azerbaijan in foreign countries and the foreign embassies in Azerbaijan, as well as to the Azerbaijani Diasporas.