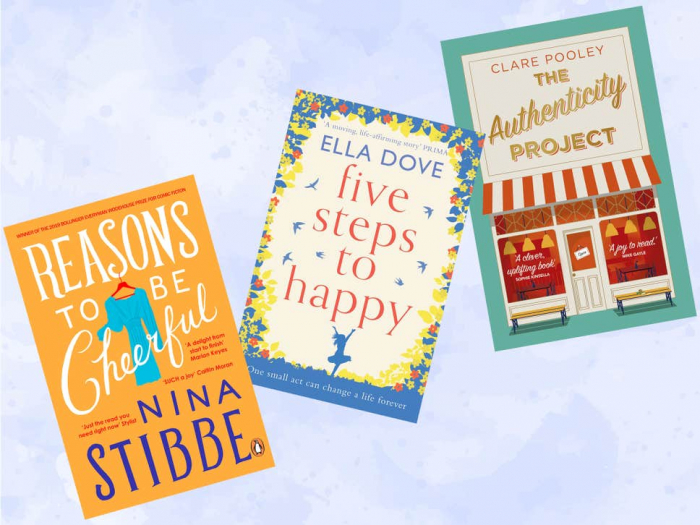 Many people are using the current lockdown situation to curl up on the sofa at home, or in gardens while it's sunny, and lose themselves in fiction, Independent reports.

Online book sales have rapidly increased. Waterstones reported a 400 per cent rise at the end of March, as readers discover they have more time on their hands to finally get through their "to read" list. And book clubs have metamorphosed into online reading groups, with readers discussing novels on Zoom instead of face-to-face.

But while publishers around the world have reported a surge in sales of titles like Albert Camus’s The Plague and Stephen King’s post-apocalyptic The Stand, many of us are choosing to immerse ourselves in feel-good, comforting fiction that reminds us of happier times.

We’ve selected some of the most uplifting novels, from the story of a grandmother and granddaughter who come up with a crazy plan to swap lives to the tale of a young amputee who sets herself five challenges to achieve in life – from braving public transport again to learning to dance.

Our choices were judged on their originality, readability and how they reminded us that there's light at the end of the tunnel.

Some of the books aren’t upbeat all the way through, but reading them definitely helped to lift our spirits.

'The Light Years' by Elizabeth Jane Howard, published by Picador

The Light Years is the first book in Elizabeth Jane Howard’s classic series, The Cazalet Chronicles. The story starts in the summer of 1937, when three generations of the Cazalet family gather at Home Place, the family home in the heart of the Sussex countryside.

Despite the idyllic setting, siblings Hugh, Edward, Rupert and Rachel have each experienced heartache. Hugh is haunted by the ravages of the First World War, Edward is trying to hide his latest infidelity, Rupert seems unable to please his demanding wife and Rachel risks losing her only chance at happiness because of her unflinching loyalty to the rest of the family.

Howard is a superb writer and storyteller and if you enjoy this, you’ve got four more Cazalet books to look forward to – Marking Time, Confusion, Casting Off and All Change.

'What Ho!: The Best of Wodehouse' by PG Wodehouse, published by Cornerstone

For light relief in dark times, many readers turn to PG Wodehouse, creator of the inimitable Jeeves and Wooster and widely judged to be the greatest comic writer of all time.

As fellow writer Evelyn Waugh said of him: “Mr. Wodehouse’s idyllic world can never stale. He will continue to release future generations from captivity that may be more irksome than our own. He has made a world for us to live in and delight in.”

'The Authenticity Project' by Clare Pooley, published by Bantam Press

Clare Pooley’s debut novel is the story of six strangers who are each living a lie. Flamboyant elderly artist Julian feels lonely and invisible to the outside world, so he decides to write the truth about his life in a notebook and leaves it in a café for others to read. It’s picked up by successful lawyer turned café-owner Monica, who writes about her longing for a baby. Before long, the book has found its way across the world and brought a motley group of people together. A heartening story about the importance of truth and friendship, with characters that spring to life on the page.

Lissa Evans’s fourth novel is a gem of a book – funny, endearing and beautifully written. Set during the Blitz, it’s the story of ten-year-old Noel Bostock, who lives on the edge of Hampstead Heath with his godmother Mattie. When Noel’s school closes, free-thinking former suffragette Mattie teaches him at home, tutoring him in esoteric subjects like the causes of the French Revolution and the nature of freedom. But his life changes when she disappears and he’s taken in by Vee Sedge, whose life is even more chaotic than his own. Evans evokes 1940s London brilliantly – the rationing, the air raid shelters, the desperate measures people took to survive and Noel’s heart-warming relationships with Mattie and Vee.

'A Gentleman in Moscow' by Amor Towels, published by Windmill Books

Amor Towles’s first novel, Rules of Civility, was named as one of the best books of 2011 by the Wall Street Journal. A Gentleman in Moscow, his second book, was published in 2016 and has sold more than a million copies.

It’s the story of count Alexander Rostov, who in the aftermath of the Russian Revolution is judged to be an unrepentant aristocrat. He’s stripped of his wealth and sentenced to house arrest in a tiny attic room while Russia undergoes decades of tumultuous upheaval. Towles’s book is a delight, with a beguiling central character and lively descriptions of life in Russia over a period of 30 years.

'The Switch' by Beth O'Leary, published by Quercus

Eileen is fed up of being 79 and stuck in a tiny Yorkshire village while her granddaughter, 20-something Leena, is tired of her London life. When Leena messes up a work presentation and is ordered to take a two-month sabbatical, the duo decide to swap places. Eileen moves to a hip Shoreditch flatshare, complete with unfriendly neighbours, online dating and coagulated milk in the fridge, and Leena heads north to Hamleigh-in-Harksdale, where she has to contend with gossiping locals and tricky family dynamics. Beth O’Leary’s first novel, The Flatshare, has sold more than 125,000 copies so far and her second is an uplifting read in troubled times.

Jilly Cooper fans are divided about which of her many novels reign supreme. For some it’s Riders, set in the world of international showjumping, while others adore Wicked!, her tale of two rival schools. We’re a fan of Rivals, first published in 1988, which lifts the lid on the cut-throat world of TV. It also sees the return of unscrupulous showjumper Rupert Campbell-Black, who’s newly divorced from his wife and keen to pursue the saintly Taggie, the daughter of TV megastar Declan O’Hara. If you’re looking for a compelling read with rivals competing for a TV franchise, snappy one-liners, affectionate descriptions of the Cotswold countryside and lots of sex, this is the novel for you. As one critic put it: “Rivals is as comforting as eating chocolate in the bath.”

'Five Steps to Happy' by Ella Dove, published by Trapeze

Journalist Ella Dove became an amputee in 2016 after a running accident. This experience inspired her first novel, Five Steps to Happy. When struggling actress Heidi has a life-changing accident in her early thirties she ends up in an amputee rehabilitation unit, unable to walk and fearful about the new world she’s been thrust into. But gradually, thanks to a fellow patient and her grandson, Heidi realises that her life isn’t over – it’s just different. She hits on the idea of making a list of five things she’s determined to do, including summoning up the confidence to tackle public transport, especially escalators, wearing skinny jeans again and learning to dance. A feel-good read that reminds us all that there’s light at the end of the tunnel.

'Reasons to be Cheerful' by Nina Stibbe, published by Penguin

Nina Stibbe’s books always bring a smile to our faces and this is no exception. Nina made her name with the autobiographical Love, Nina, a collection of letters she sent home while working as a nanny on a north London street where neighbours included famous literary names like Alan Bennett, Jonathan Miller and Michael Frayn. She then turned to fiction and Reasons to be Cheerful is her third novel about teenager Lizzie Vogel. Set in 1980, it sees Lizzie leave her “alcoholic, nymphomaniacal, novel-writing” mother to start a new job as a dental assistant. This laugh out loud novel won the 2019 Bollinger Everyman Wodehouse Prize for comic fiction.

'The Curious Incident of the Dog in the Night-Time' by Mark Haddon, published by Vintage

Mark Haddon’s murder-mystery novel about a 15-year-old boy who has Asperger’s Syndrome is a classic. Christopher Boone knows a lot about maths but very little about human beings. He loves lists, patterns and the truth, but hates the colours yellow and brown and being touched. At the start of the book he has never gone further than the end of the road but when he finds a neighbour’s dog murdered, he sets out on a terrifying journey that turns his world upside down. Poignant, funny and thought-provoking, this outstanding novel became an award-winning West End play and was named the Whitbread Book of the Year in 2003. Joan Bakewell, who chaired the judging panel, said of Haddon: “He manages, without patronising the boy's voice, to reveal the child as a tender and thoughtful person and we see, through the boy, the chaos of the adult world around him.”