'We refuse to die in jail': Argentine inmates set fire to prison in coronavirus protest 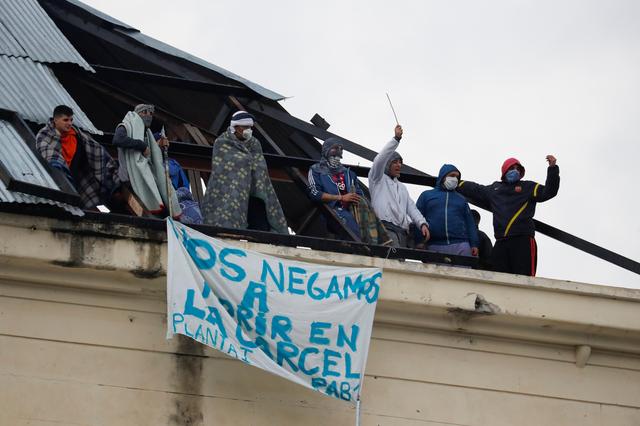 Inmates at an Argentine prison in Buenos Aires set fire to mattresses and protested on the roof of the jail, demanding some people be released due to fears of infection by the coronavirus, according to local media and a Reuters witness.

A Reuters witness outside the jail on Friday saw at least a dozen people on the roof of the facility in the Villa Devoto neighborhood of the city. The group had protest banners and some were holding chains, sticks and other weapons.

“We refuse to die in prison,” one banner hanging from the side of the jail read. Another, referring directly to the coronavirus outbreak said: “COVID-19 is in Devoto. Genocidal judges, silence is not my language.” COVID-19 is the potentially lethal respiratory illness caused by the coronavirus.

The riot initially began late on Thursday after prisoners learned that a number of people in the facility were infected with the virus, local media reported. They demanded the release of inmates at greater risk of contracting the coronavirus.

The state-run Telam news agency said that prisoners had burned mattresses and taken over two floors of the prison. A large number of the inmates were involved with the riot.

A Reuters witness heard sounds like gunshots and saw police helicopters flying over the prison, which according to the Federal Penitentiary Service can house up to 1,683 detainees.

There was no official information immediately available on any injuries or fatalities. Government representatives did not immediately respond to Reuters inquiries.

Argentina, which imposed a tough nationwide lockdown in mid-March, has registered a total of 3,435 confirmed cases of coronavirus, with 167 deaths, the latest official data show.