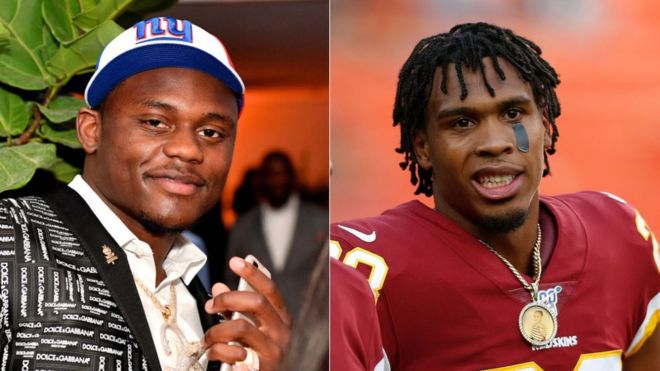 Florida police are searching for two NFL players after they allegedly robbed people at a house party.

Deandre Baker of the New York Giants and Quinton Dunbar of the Seattle Seahawks are said to have robbed other guests at gunpoint.

Neither man has been arrested yet. A police spokeswoman said authorities were in touch with the NFL and a lawyer for one player.

"Obviously, there are attempts to get them to turn themselves in," Miramar police spokeswoman Tania Rues told the New York Times.

According to the police arrest warrant, the incident occurred after an argument broke out at the house party, where guests were playing cards and video games.

Baker allegedly took out a gun before he, Dunbar and another man - described as wearing a red mask - started taking valuables and cash from people.

The man in the red mask is not fully identified in the reports. Baker allegedly asked this person to shoot one witness, but the red masked man did not do so.

All three then made off in separate vehicles - a Mercedes Benz, a Lamborghini and a BMW.

The police affidavit said one witness was "under the impression this was planned out", as the three getaway vehicles "were later pre-positioned to expedite an immediate departure from the area".

Baker, 22, is facing eight charges in total, four for armed robbery and four for aggravated assault with a firearm. Dunbar, 27, has been charged with four counts of armed robbery.

The NFL says it is aware of the incident but has not commented. A statement issued by the New York Giants said they had been in touch with Deandre Baker and they had no further comment.

Both men play as cornerbacks for their respective teams.