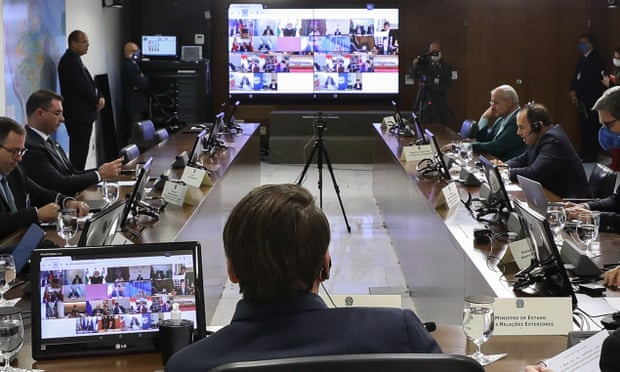 If coronavirus crosses all boundaries, so too must the war to vanquish it. But the G20, which calls itself the world’s premier international forum for international economic cooperation and should be at the centre of waging that war, has gone awol – absent without lending – with no plan to convene, online or otherwise, at any point in the next six months.

This is not just an abdication of responsibility; it is, potentially, a death sentence for the world’s poorest people, whose healthcare requires international aid and who the richest countries depend on to prevent a second wave of the disease hitting our shores.

On 26 March, just as the full force of the pandemic was becoming clear, the G20 promised “to use all available policy tools” to support countries in need. There would be a “swift implementation” of an emergency response, it said, and its efforts would be “amplified” over the coming weeks. As the International Monetary Fund (IMF) said at the time, emerging markets and developing nations needed at least $2.5tn (£2,000bn) in support. But with new Covid-19 cases round the world running above 100,000 a day and still to peak, the vacuum left by G20 inactivity means that allocations from the IMF and the World Bank to poorer countries will remain a fraction of what is required.

And yet the economic disruption, and the decline in hours worked across the world, is now equivalent to the loss of more than 300 million full-time jobs, according to the International Labour Organization. For the first time this century, global poverty is rising, and three decades of improving living standards are now in reverse. An additional 420 million more people will fall into extreme poverty and, according to the World Food Programme, 265 million face malnutrition. Developing economies and emerging markets have none of the fiscal room for manoeuvre that richer countries enjoy, and not surprisingly more than 100 such countries have applied to the IMF for emergency support.

The G20’s failure to meet is all the more disgraceful because the global response to Covid-19 should this month be moving from its first phase, the rescue operation, to its second, a comprehensive recovery plan – and at its heart there should be a globally coordinated stimulus with an agreed global growth plan.

To make this recovery sustainable the “green new deal” needs to go global; and to help pay for it, a coordinated blitz is required on the estimated $7.4tn hidden untaxed in offshore havens.

As a group of 200 former leaders state in today’s letter to the G20, the poorest countries need international aid within days, not weeks or months. Debt relief is the quickest way of releasing resources. Until now, sub-Saharan Africa has been spending more on debt repayments than on health. The $80bn owed by the 76 poorest nations should be waived until at least December 2021.

But poor countries also need direct cash support. The IMF should dip into its $35bn reserves, and the development banks should announce they are prepared to raise additional money.

A second trillion can be raised by issuing – as we did in the global financial crisis – new international money (known as special drawing rights), which can be converted into dollars or local currency. To their credit, European countries like the UK, France and Germany have already lent some of this money to poorer countries and, if the IMF agreed, $500bn could be issued immediately and $500bn more by 2022.

And we must declare now that any new vaccine and cure will be made freely available to all who need it – and resist US pressure by supporting the World Health Organization in its efforts to ensure the poorest nations do not lose out. This Thursday, at the pledging conference held for the global vaccine alliance in London, donor countries should contribute the $7bn needed to help make immunisation more widely available.

No country can eliminate infectious diseases unless all countries do so. And it is because we cannot deal with the health nor the economic emergency without bringing the whole world together that Donald Trump’s latest counterproposal – to parade a few favoured leaders in Washington in September – is no substitute for a G20 summit.

His event would exclude Africa, the Middle East, Latin America and most of Asia, and would represent only 2 billion of the world’s 7 billion people. Yet the lesson of history is that, at key moments of crisis, we require bold, united leadership, and to resist initiatives that will be seen as “divide and rule”.

So, it is time for the other 19 G20 members to demand an early summit, and avert what would be the greatest global social and economic policy failure of our generation.