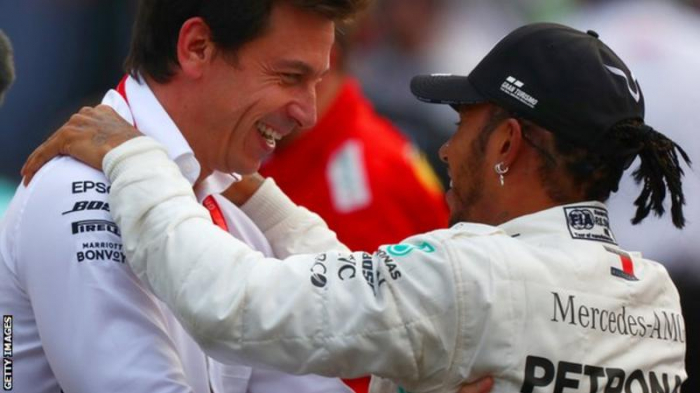 Mercedes Formula 1 boss Toto Wolff has backed Lewis Hamilton for speaking out on racism and diversity following the civil unrest in the United States.

Hamilton said on Tuesday that he was "completely overcome with rage" at events following George Floyd's death.

Wolff said: "Lewis is a supporter of minorities. I learned a lot from him.

"He asked me once: 'Have you ever had the active thought that you are white?' I said I had never thought about it. He said: 'I think about it every day.'"

Hamilton, F1's first black driver, has been deeply affected by the death of 46-year-old African-American man George Floyd in police custody, after an officer knelt on his neck for several minutes.

The incident has sparked demonstrations across the US.

Wolff said: "It is very hard for us to comprehend how difficult it is [as a black man] and I am happy he has come out so vocal. He is one of the ambassadors of this sport and I think it's good."

Wolff said he had "seen what discrimination looked like as a young child" having spent part of his childhood living with a Jewish family after his own fell into difficulties.

"Sometimes it needs events to trigger a massive wave of support for any minority," Wolff added. "It is good that Lewis, as a sports superstar, speaks out in a sport that is dominated by white males."

Wolff, speaking on a conference call following the announcement that the F1 season is to re-start next month, also addressed the issue of Mercedes' future driver line-up.

Both Hamilton and his team-mate Valtteri Bottas are out of contract at the end of the year and four-time world champion Sebastian Vettel is on the market after being told Ferrari would not offer him a new contract.

Wolff said he "didn't want to discount Sebastian" but emphasised that his "priority" lay with Hamilton and Bottas and Mercedes protege George Russell, who drives for Williams.

Wolff said he was "keeping a close eye on the Williams situation" following the announcement the team was up for sale after making a £13m loss last year.

Hamilton is expected to stay at Mercedes, although Wolff emphasised that they had not yet sat down to discuss a new contract.

"There is a lot of trust," Wolff said. "We have been together for a long time and never did we have to take the contract out and read what was written in them. So when racing resumes we will spend some time together and dig the contract out and look at the numbers and the rights and hopefully have something pretty soon."

He denied he was paying "lip service" to Vettel, but implied he was not Mercedes' first choice as a partner for Hamilton.

"We owe it to a four-time world champion not to come out and say straight away no," Wolff said. "We have a fantastic line-up. But one may decide he doesn't go on racing any more.

"This is why I didn't want to come out in June and say no to Sebastian. I wouldn't do it to him as a driver to be that blunt and I have seen black swans when no-one expects - look at Nico Rosberg (who retired unexpectedly after winning the world title with Mercedes in 2016).

"In that respect we are keeping our options open and of course concentrating our discussions on current drivers."