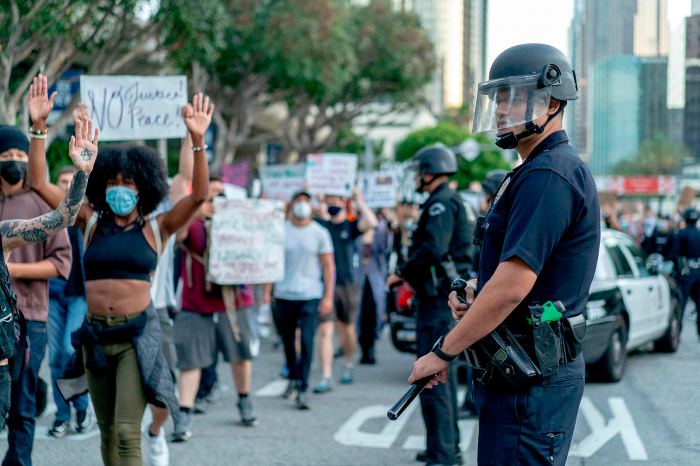 Amid the recent protests in the wake of George Floyd’s killing, longtime activists and others have called for “defunding” the police, disbanding or abolishing police departments, and other measures to change the scope — and expectations — of police officers’ work. It makes sense to reallocate funds, shift responsibility away from roles that police have absorbed over time, and establish guidelines on what society wants and needs from police, including how we expect the police to act in our service.

Insightful, decisive leadership is necessary to embrace police reform, including the funding shifts. City leaders should have the choice to reinvest in competent, evaluated programs for young people, community education opportunities, social services and improved health-care services — including telehealth — without obstruction from police unions. Defunding police departments to redistribute resources means that officers can finally step back from filling the gaps in other areas created by government budget cuts and, instead, focus on their primary responsibility: to ensure a safe community for every person in a way that respects justice and dignity.

But what does that really look like? How do we move from a police force to police service?

Departments need to invest in reconnecting with the communities they protect. A good first step is officers in established beats collaborating to achieve improved safety without harmful consequences and being aware of community needs. In the most basic of terms laid out in the Constitution, every department should be protecting every individual’s civil rights. This is the very least every police department should be doing; departments can and should strive to go beyond this floor. Sadly, police have not always committed themselves to ensuring human rights are protected.

A multitude of videos illustrate that, too often, use of inappropriate and excessive force has devastating consequences. Either these actions stem from insufficient, decades-old policies, or officers continuing to make decisions that don’t follow their department’s rules and expectations. The confluence of sound policies that govern behavior, supervision and training do not entirely ensure appropriate behavior, but they can alert a department’s leadership to problem behavior if better monitored.

Reliable resources exist, including a treasure trove of data — often untapped — in consent decrees, the court-mandated agreements between the Justice Department and cities that follow findings of alleged civil rights abuses. The agreements spell out basic, minimal reforms vetted by the Justice Department, and other experts weigh in with detailed requirements for policy, training and accountability mechanisms.

Routinely reviewing policies and practices against the benchmarks of consent decrees can help police leaders measure how well they’re doing and identify whether, and where, their policies and practices fall short. Using an analysis of 21 consent decrees from the past two decades, the Crime and Justice Institute released a resource last year to help law enforcement leaders strengthen their departments through a constitutional lens. The three categories most frequently addressed in consent decrees should be a wakeup call: use of force; stops, searches and arrests; and bias-free policing. Each issue area deeply connects to community confidence and, in turn, the safety of both police officers and the public.

Additionally, the 2015 report from the President’s Task Force on 21st Century Policing — on which Chief Ramsey served — provides a framework for reform with 92 action steps. In addition to acknowledging the impact of policing on communities of color, the recommendations include building trust and legitimacy both internally and externally, focusing on community policing and crime reduction without the historic consequential harmful impact on communities of color, and regular training and education for officers.

Now is the time for every law enforcement executive and union leader to jump-start necessary reform efforts. We recognize that the pain and anger erupting again in the aftermath of George Floyd’s death have most deeply impacted black communities. We cannot accept these injustices and call for policing reform that acknowledges and addresses systemic racism. We cannot stand for this racial disparity any longer. Otherwise, this continuing injustice affects us all by eroding trust in public institutions and deepening inequities.

Police departments must have an active role in the hard work to repair deep, long-standing rifts in communities and in redefining themselves. It starts with departments ensuring they have strong, evidence-based policies tightly governing their use of force — and making sure that officers follow them.

Community members assess police departments based on how they see officers conduct themselves. A department’s reputation influences compliance with the law, reporting of crime and overall community relations. Updated policies, sound management and quality training are key to improving relations and keeping both the community and officers safe.


Christine M. Cole is executive director of the Crime and Justice Institute, a nonprofit that focuses on improvements in criminal and juvenile justice systems. Charles H. Ramsey is a founding partner with 21CP Policing Solutions and was chief of the Metropolitan Police Department in Washington from 1998 to 2007. He retired as police commissioner of Philadelphia in 2016.