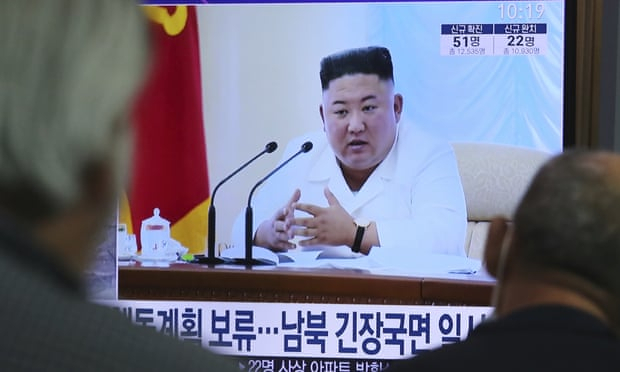 Kim Jong-un has suspended plans to increase military pressure on South Korea, in a surprise move that comes after weeks of mounting tensions on the peninsula, the Guardian reports.

The North Korean leader vetoed measures that are thought to have included the redeployment of troops neat the border between the two countries, apparently in retaliation for Seoul’s inability to prevent defector groups from sending propaganda leaflets into the North.

Kim took the decision at a meeting of the ruling party’s central military commission, whose members discussed plans to “bolster” North Korea’s “war deterrent” and “took stock of the prevailing situation”, the official KCNA news agency said on Wednesday.

No reason was given for the decision, but some experts speculated that the regime had decided to row back on its threats to give the South the opportunity to offer concessions.

Those could include the reopening of the Kaesong industrial complex, once an important symbol of cross-border cooperation, or the resumption of South Korean tours to the Mount Kumgang resort.

It would be difficult for Seoul to revive the projects, however, without violating international sanctions imposed on Pyongyang over its nuclear and ballistic missile programs.

North Korea had been expected to increase pressure on its neighbour, soon after it severed inter-Korean hotlines and blew up a liaison office set up in 2018 to foster better bilateral ties.

The regime in Pyongyang has voiced anger at plans by defector groups in the South to send leaflets critical of the Kim regime, along with rice and other items across the countries’ land and maritime borders, describing them as violations of a 2018 agreement to cease “all hostile acts”.

It is also reportedly growing impatient over the lack of progress in nuclear negotiations with the US. Last year’s summit between Kim and Donald Trump in Hanoi broke down after the leaders disagreed on what measures the North should take before Washington agreed to relieve sanctions.

In addition, the general staff threatened to reoccupy border guard posts that had been abandoned under the 2018 deal, agreed during a summit between Kim Jong-un and the South Korean president, Moon Jae-in.

There was speculation that North Korea would also launch its own propaganda war by bombarding South Korea with millions of leaflets. And on Tuesday, media reports said the North had installed loudspeakers along the border that had been removed after the Kim-Moon summit.

The 38 North website, which monitors North Korea, speculated that the rise in anti-South rhetoric in recent weeks had given the regime “just enough room to de-escalate”, but added that the prospects for détente remained slim.

“Even if North Korea avoids a serious escalation of tensions, it is still unlikely to pursue further diplomacy with the Moon administration anytime in the near future,” it said in a commentary, adding that Pyongyang could instead direct its criticism towards the US.