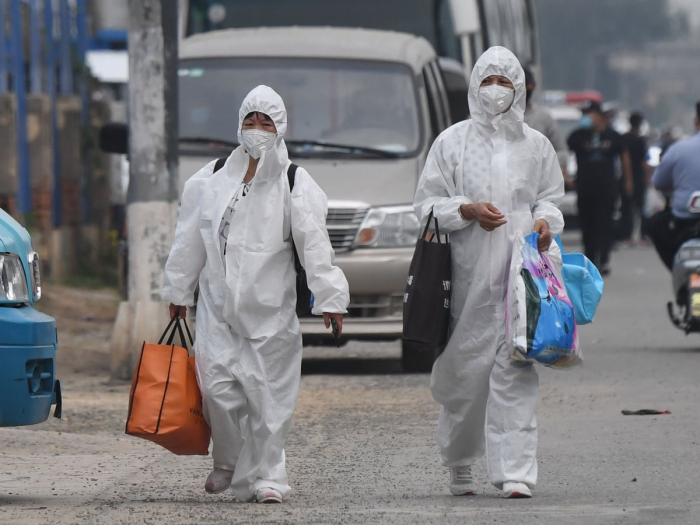 Of the 45 countries to have recorded more than 25,000 coronavirus cases to date, 21 currently have relaxed responses to the pandemic. Of these, 10 are reporting a rising number of cases.

Ten countries currently facing serious increases in coronavirus infections are among those nations with less stringent approaches to managing their outbreaks.

Guardian analysis of coronavirus data, in combination with the University of Oxford’s coronavirus government response tracker, has identified that 10 of the 45 most badly-affected countries are also among those rated as having a “relaxed response” to the pandemic, underlining the mitigating impact of effective government public health policies.

The countries include the US - which is experiencing its largest increase in coronavirus cases since April; Iran, Germany and Switzerland - two European countries where the R rate has risen above one this week. Each of these countries faces the prospect of a second wave of infection, with lower stringency in their pandemic response allowing week-on-week cases to creep up.

Of the worst-hit countries still to be facing stringent lockdowns, nine are reporting rising numbers of cases while three are reporting that the curve is flattening.

Experts warn of the risk of a second wave of coronavirus, with the World Health Organization (WHO) reporting a record increase in global coronavirus cases on Sunday. But as countries face the harsh economic realities of lockdown, many are choosing to reopen their economies.

A country has been classed as being “relaxed” if its stringency index score is under 70 out of 100, according to the latest data from the University of Oxford’s tracker. The tracker assesses countries’ public information campaigns, containment measures and closures to give them a score out of 100 on their stringency index.

Germany’s reproduction rate of coronavirus jumped to almost three earlier this week, after an outbreak at an abattoir forced two counties back into lockdown. This was after the country lowered its response to the pandemic, with its stringency score falling from 73 out of 100 at the start of May to 50.

While Germany’s numerical rise in cases is still small at this point, Saudi Arabia and Iran are experiencing pronounced second waves after relaxing lockdown measures.

Iran began to see a second peak of the virus as it lessened its lockdown through May. While officials suggested the surge could be down to more testing, the proportion of tests returning positive increased at the same time, indicating that the virus had once again spread among the population.

Meanwhile, the stringency score in the US dropped in June after several state governors relaxed their lockdowns. This has led to local flare-ups, with new weekly cases increasing by a quarter compared with last week. 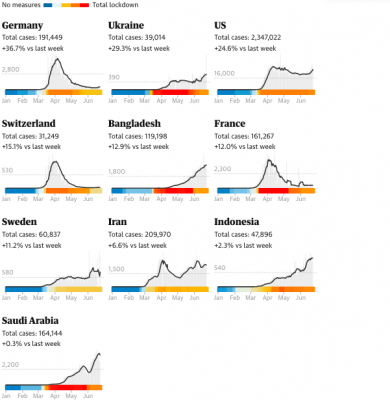 Thomas Hale, associate professor in public policy at the Blavatnik School of Government and research lead for the Oxford Covid-19 government response tracker, said: “Countries that were hit earlier in Asia and Europe, and which managed to contain cases, have moved out of lockdown more quickly.

“We’ve also seen countries moving quickly out of lockdown when the economic costs become too great - for example, India. As our lockdown rollback checklist shows, many countries are now moving out of lockdown before meeting the WHO’s recommended conditions.”

There are positive signs that the number of cases in other countries with less stringent policies is still falling. In total, 11 of the 45 worst-hit countries have a stringency score of below-average 70 out of 100 while seeing cases fall.

This includes countries that imposed strong lockdowns after suffering from early first waves, such as Italy and Spain, as well as others that didn’t lock down as hard, such as Belarus.

Italy and Spain, which collectively have recorded almost half a million cases and 62,000 deaths, have both recorded the weekly number of new cases dropping by over a quarter despite lockdown measures being relaxed significantly. 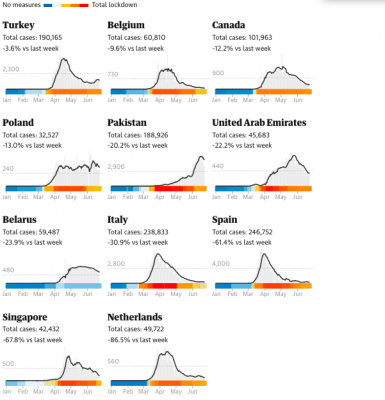 Despite the falling number of coronavirus cases is these countries, experts warned that they had to remain cautious.

Martin McKee, professor of European public health at the London School of Hygiene & Tropical Medicine, told the Guardian: “We have seen some surges in US States such as Arizona that had stabilised rates and even achieved small declines from the peak. Iran is also experiencing what appears to be a second peak, although there is continued debate about the role of increased testing.

“Easing of restrictions can be safe providing the incidence of infection has been brought down to very low levels, well below what we have in the UK now, and there is a robust find, test, trace, isolate and support system in place.”

In total, seven of the 45 countries to record over 25,000 coronavirus cases are still locked down - with a stringency score of between 70 and 80 - while cases continue to rise.

Despite the weekly number of cases in Brazil continuing to rise - by 17.5% week-on-week - the country’s stringency score has fallen slightly in the last month, after state governors relaxed local lockdowns in order to prioritise the country’s fragile economy. Another increase in cases has followed. 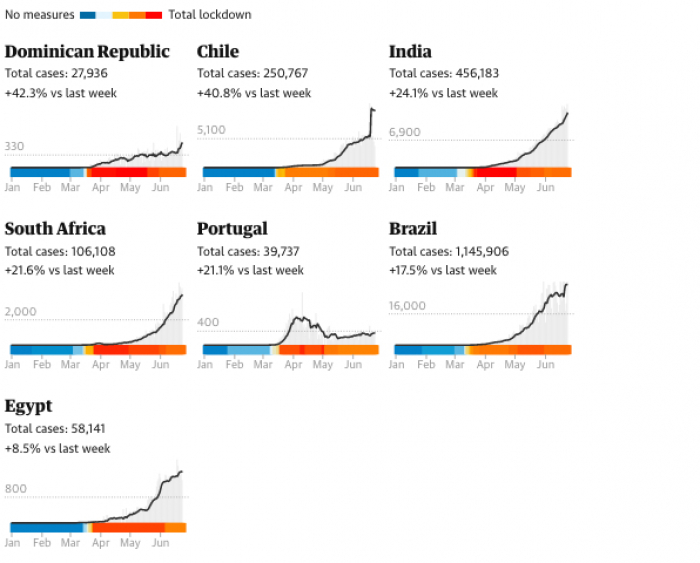 Five other countries still have a similar level of cautious stringency but are seeing the policy paying off with weekly new cases falling week-on-week: Afghanistan, Ireland, the UK, Russia and Mexico.

The UK’s stringency score is currently 73 out of 100, having stood at 76 at the start of May, with measures such as the quarantine for international arrivals balancing out social distancing relaxations in early June. This week’s new cases were 11.4% lower than the week before, showing that this relaxation hasn’t yet caused any signs of a second wave. 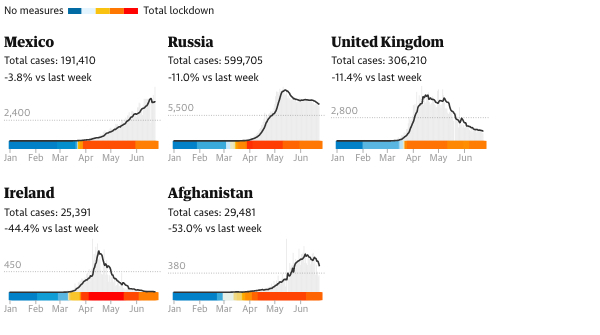 Several countries in the Middle East and Latin America still have tough lockdowns in place, with stringency scores of over 80 out of 100. Three of these - Ecuador, Qatar and Peru - are having some success, with a marked flattening of their epidemiological curves.

New weekly cases in Peru and Qatar have dropped by over a quarter week-on-week. Both countries have struggled with major outbreaks of the disease, but if this recent positive trend continues, they may start to lessen the stringency of their response to the pandemic.

More worryingly, there are still nine badly-hit countries which currently have tough lockdowns and are reporting rising numbers of cases.

Three of these are in South America - Bolivia, Argentina and Colombia - which was designated the centre of the pandemic by the World Health Organization at the end of May.

All three of these countries are in the grip of their first wave of infection. Argentina locked down early in the pandemic and was hailed as a South American success story as cases remain flat through March and April. But after opening up slightly through late April and early May, cases have more than quadrupled as coronavirus ripped through the country. 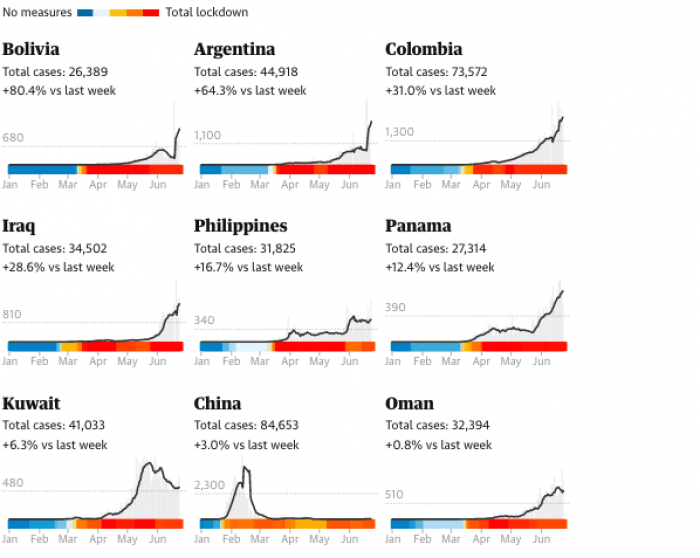 Dr Andrea Ammon, director of the European Centre for Disease Prevention and Control (ECDC), recently warned that the virus’s characteristics, low levels of population immunity and still high levels of virus circulation mean that countries had to be “realistic” and that “it’s not the time now to completely relax”.

Prof Hale said: “Closure and containment policies have proven essential to break the chain of infection and slow the spread of the disease. These costly measures buy governments time to put in place the test and trace policies, increased healthcare capacity, and other policies we need to manage the disease long-term.

“The key question is: how have governments used the time they have bought at great expense? If governments roll back measures too quickly, without having put protective policies in place, then they are likely to risk a second wave of cases.”