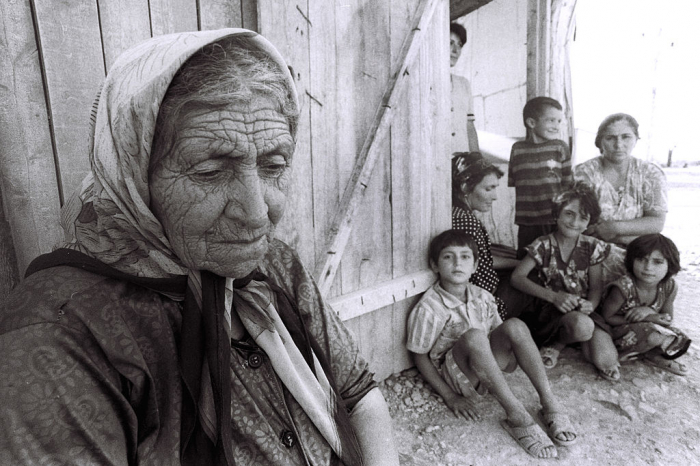 World Refugee Day, which the United Nations recently observed on June 20, brings to light how internally displaced persons (IDPs) are the most vulnerable individuals suffering from displacement as a result of armed conflict.

Unlike refugees, IDPs do not cross international borders and remain displaced within the internationally recognized territory of a state. Nonetheless, they still incur all the losses induced by war — loss of homes, property, loved ones, health, and hope. The existing international documents on refugees, however, do not apply to IDPs. This makes their plight more difficult and dangerous than the plight of refugees.

The Guiding Principles on Internal Displacement, a non-binding international document on IDPs, define this group as “persons or groups  of persons who have been forced or obliged to flee or to leave their homes or places of habitual residence, in particular or as a result of or in order to avoid the effects of armed conflict.”

Unlike refugees, IDPs have to rely on assistance of their own governments for their protection, which they might or might not receive, depending on the specific circumstances faced by the governments. The Kampala Convention of 2009 is the world’s first, and still its only, binding international document applicable to a wider continent that seeks to deal with the plight of IDPs.

Today, millions of people are living as IDPs and the absence of a universal document envisaging the protection of these people makes them all the more vulnerable.

Azerbaijan is among the countries with a large IDP population, displaced as a consequence of the Armenia-Azerbaijan conflict. The decades-long conflict lingers with no end in sight, inflicting enormous socioeconomic damage alongside massive human suffering and deprivation. The living victims of the conflict — IDPs of Azerbaijan — can relate to most of the above.

As an Azerbaijani woman, I would like to highlight the most pressing issues associated with the plight and heightened vulnerability of IDP women, specifically those connected with education- and health-related challenges.

Humanity has come a long way to embrace gender equality. It gives me a sense of great pride that my own country, in the two-year era of the Azerbaijan Democratic Republic (1918-1920), was the first nation in the Muslim East to grant universal suffrage to women in 1919. The first secular school for girls was established in Baku in 1901 with financial contributions from well-known Azerbaijani oil millionaire and philanthropist Haji Zeynalabdin Taghiyev.

Subsequently, the number of schools for girls increased in Baku. An educated girl means educated children and an educated nation. Realization of this truth conditioned the choices of Azerbaijani intellectuals in favor of educating Azerbaijani girls.

Today, Azerbaijani girls and women have access to free and quality education. They are active citizens of their country working as doctors, teachers, engineers, police officers, diplomats, politicians, journalists, entrepreneurs, and more. I am genuinely happy as a mother of my teenage girl that she can dream big and build her own future in a society that grants equal opportunities for both genders.

But have all women of my country always enjoyed unfettered rights to health, education, and other social benefits and activities? What does the reality hold for IDP women of Azerbaijan? There have been many testimonies about the horrors of war by IDP women who fled their homes in the occupied territories of Azerbaijan.

Wars and conflicts do not spare the vulnerable members of a population, including women, and this was particularly true of the Nagorno-Karabakh War (1988-1994) between Armenia and Azerbaijan. Instances of rape and torture while in hostage were reported by the surviving IDP women of Azerbaijan; their basic rights to health and education were violated and continuously denied.

Violence and destruction razed not only homes, but also schools and hospitals to the grounds in the occupied territories — thus stripping the population of these territories, including women and girls, of a necessary access to these vital facilities.

It is not difficult to imagine the magnitude of suffering and destitution these people were subjected to in the early years of their lives as IDPs. Large numbers of IDPs from the occupied territories of Azerbaijan put a heavy socioeconomic burden on a fledgling state that also had to deal with various challenges of transition.

As the most vulnerable strata of IDPs, women and children suffered the most from the dire conditions. They lived in collective accommodations and dwellings. They lacked sustenance. Many contracted chronic illnesses caused by these circumstances, including in reproductive health. It took substantial efforts, time, planning, and resources to provide IDPs with opportunities to re-exercise their rights to education, regain access to basic health facilities, and eventually rebuild their lives in different parts of Azerbaijan.

Today, there are many IDP women in Azerbaijani society who have overcome the horrors of the past and raised above the demons that may have haunted them since their displacements. Against all odds, they have brought up their children, members of the next generation that may or may not remember or understand all the hardships of being an IDP.

Many IDP women managed to gain a second lease on life and learned to put their talents, skills, and professional qualities into use in a new environment. Some became entrepreneurs through the assistance of relevant programs and initiatives that taught these women or honed their skills in arts and crafts as well as agriculture.

However, there are also many IDP women who have perished during this perilous journey without a chance for better days, due to lack of healthcare, nutrition, and normal living conditions. It is also in their memory that the surviving IDP women share their stories of human tragedy, thereby demonstrating a living example that Azerbaijan is a country of equal opportunities for both genders, and that there is always hope for a better future.

We should see the day when all of the world’s IDPs — especially women and children, the most vulnerable among the vulnerable — can return to their homelands and lead flourishing or at least, decent lives in the places they once were forced to leave.

Dr. Esmira Jafarova is a board member of the Baku-based Center of Analysis of International Relations. She holds a Ph.D. in political sciences from the University of Vienna and was a visiting scholar at the Harriman Institute of Columbia University. She is the author of “Conflict Resolution in South Caucasus: Challenges to International Efforts” (Lexington Books, 2015).