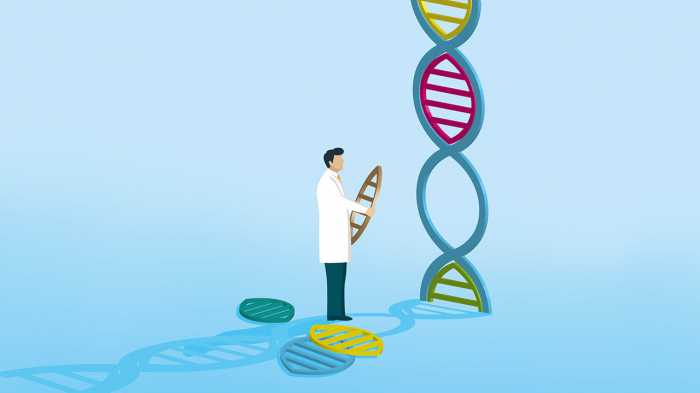 The prospect of erasing some disabilities and perceived deficiencies hovers at the margins of what people consider ethically acceptable.

Ask any expectant couple what they hope their baby will be, and one answer is likely to be “healthy.”

But one gene gone awry can imperil a child’s health, causing serious disease or a disability that leaves one more susceptible to health issues. With advances in gene-editing technology, though, biomedicine is entering an uncharted era in which a genetic mutation can be reversed, not only for one person but also for subsequent generations.
Public debate has swirled around genetic engineering since the first experiments in gene splicing in the 1970s. But the debate has taken on new urgency in recent years as gene modification has been simplified with CRISPR (short for Clustered Regularly Interspaced Short Palindromic Repeats) technology.

Scientists have compared the technology to word processing software: It acts like a cursor placed next to a typo, capable of editing a gene at a level so granular it can change a single letter in a long genetic sequence.

While still highly theoretical when it comes to eliminating disabilities, gene editing has drawn the attention of the disability community. The prospect of erasing some disabilities and perceived deficiencies hovers at the margins of what people consider ethically acceptable.

“People are understandably very scared of it, of the many different roads it could take us down as a society,” said Meghan Halley, a bioethics researcher at Stanford University and mother of three children, including a 5-year-old with a disability. “Broadly speaking, this is always going to be problematic because of the many things that disability means.”

CRISPR is widely seen as holding great promise for treating diseases that until now have been intractable.

There are two main types of CRISPR-based editing. One is the correction of a gene in an individual living with a condition or disease. This is known as somatic cell editing (“somatic” refers to the body). In June, NPR reported that Victoria Gray, a woman with sickle cell disease, experienced a significant decrease in her episodes of painful sickle crises in the first year after gene-editing treatment.

In the future, Ms. Gray’s children or grandchildren may be able to take advantage of the other type of CRISPR “fix”: an edit to the human germ line. This involves making changes to a fertilized egg that not only last through the life of an individual but also are passed on to future generations.

This type of “inheritable” gene editing is inapplicable to conditions like autism or diabetes, in which the hereditary component is caused by many different genes. But it is suited to disorders caused by variation in a single gene. Sickle cell disease fits into that category, as do cystic fibrosis and Duchenne muscular dystrophy.

Yet bioethicists point out that inheritable gene editing raises large societal questions, given the dire consequences of an error, as well as the ethical questions that arise at the prospect of erasing disability from human existence. There is also concern that gene editing for health reasons will be out of reach for many because of its cost.

“There absolutely must be broad public discussions about whether we’re ready to use something that has an unprecedented capability of making changes that have the potential to be passed on to subsequent generations,” said Dana Carroll, a biochemistry professor at the University of Utah who is interim director of the Public Impact Program at the Innovative Genomics Institute at the University of California, Berkeley.

The debate grew more heated in 2018, after a scientist in China announced the birth of the world’s first gene-edited babies — twin girls — using CRISPR to give them immunity to H.I.V. The announcement generated outrage around the world. In December 2019, a court in China sentenced the scientist to three years in prison for carrying out “illegal medical practices.”

Professor Halley’s middle child, Philip, was born with multiple anomalies of his gastrointestinal system. In addition, Philip has had a succession of health complications, including a stroke just before age 2, leading his doctors to suspect a still-unidentified genetic disorder.

Families like hers, Professor Halley said, offer good examples of “very ripe cognitive dissonance” around the topic of inheritable gene editing. As a mother, she said, she would do anything to prevent the pain her son has been through.

Yet she is aware of the inconsistency between that desire and her unwillingness to “do anything that would take away him, take away who he is,” she said. “And he is who he is partly because of the challenges he has faced.”

Professor Halley acknowledged the inherent tension between the huge benefits that gene-editing technology could bring in preventing serious diseases and disabilities for which there is no treatment, and what she calls the “potential risk of going down a road that feels uncomfortably close to eugenics.”

Less ethically freighted are therapies to cure serious diseases in people who are already living with them. “I think that there are opportunities to use gene-editing technologies to treat genetic diseases that don’t raise the societal implications of altering permanently patterns of human inheritance,” said Dr. Alex Marson, director of the Gladstone-UCSF Institute of Genomic Immunology in San Francisco.

“This is an opportunity for patients to consent to these procedures and be involved in the discussions about the risks and benefits in ways that wouldn’t be possible by intervening in an embryo,” Dr. Marson said. “Plus the modification wouldn’t be passed on to the patient’s sperm or eggs. So it wouldn’t affect future generations.”

Yet, according to interviews with parents of children with disabilities, as well as the children themselves, many are ambivalent about gene editing in general.

Ruthie Weiss, 13, was born with oculocutaneous albinism, a genetic disorder greatly impairing her vision that could theoretically be addressed by CRISPR.

“If there was someone who could have waved a magic wand and made the whole thing go away, we would have done that in an instant,” said Dr. Ethan Weiss, Ruthie’s father. Yet now, Dr. Weiss said, having watched Ruthie grow up, “We’re blessed to have her as she is.”

That ambivalence toward gene editing was reflected in a 2018 Pew Research Center survey, which found that a majority of Americans approved of gene editing that would result in direct health benefits while they considered the use of such techniques to bolster a baby’s intelligence to be going “too far.”

The survey also found that the biggest worry was that gene editing would be available only to those who could afford it.
“That’s a critical ethical issue,” Dr. Marson said. “We have a real responsibility when we develop these technologies to think about how to make them scalable and accessible.”

Lizzie Nattinger and Fabrizio Pirolo, who live in Brooklyn, went through a scare earlier this year when, during Ms. Nattinger’s pregnancy with their first child, a routine ultrasound in the second trimester showed a bowel abnormality in the fetus that might indicate a marker for cystic fibrosis or Down syndrome.

Results of further testing came back showing no such markers, and their son, Giacomo, was born in mid-June. But in the weeks that they were facing uncertainty, the couple fretted over whether they might have to choose between terminating the pregnancy and caring for and raising a severely disabled child. “I already felt emotionally connected to the baby,” Ms. Nattinger said. “It set off a chain of really big questions.”

Knowing that gene editing might be an option should their next child need it leaves Ms. Nattinger and Mr. Pirolo without a clear answer.

“It’s a really tough, tough choice, looking at it in a vacuum, as an individual, versus looking at it from a bigger societal perspective,” Mr. Pirolo said. “I think those are really at odds with each other.”

Ruthie Weiss said that she had sympathy for parents, but that she would not choose a different life for herself, even if she had the chance to fix the gene mutation for herself and restore her vision. Nor, she added, would she edit her children.
“Of course parents don’t want their kid to suffer,” she said. “And there are some things that I wish I could see. In certain situations, it’s very inconvenient.” Ruthie plays a variety of sports, including basketball, she said, and she wouldn’t mind being able to see the basket. “But it’s not like the cons outweigh the pros.”

Like Ruthie Weiss, Amanda Grys, who lives in Wisconsin, was born with oculocutaneous albinism. Unlike Ruthie, Amanda is also on the autism spectrum, and as an infant she had a form of epilepsy that caused hundreds of seizures a day. Now 38, with the seizures under control, Amanda Grys works as a cashier at Walgreens.

Her mother, Ellen Grys, said that if she had had the chance to edit the embryo that carried the mutated gene, she would have chosen not to. “I don’t like messing around with Mother Nature,” she said. “Because when you start manipulating genes, at what point do you stop?”


Katie Hafner, a former staff reporter for The New York Times, is co-author with Matthew Lyon of “Where Wizards Stay Up Late: The Origins of the Internet.”