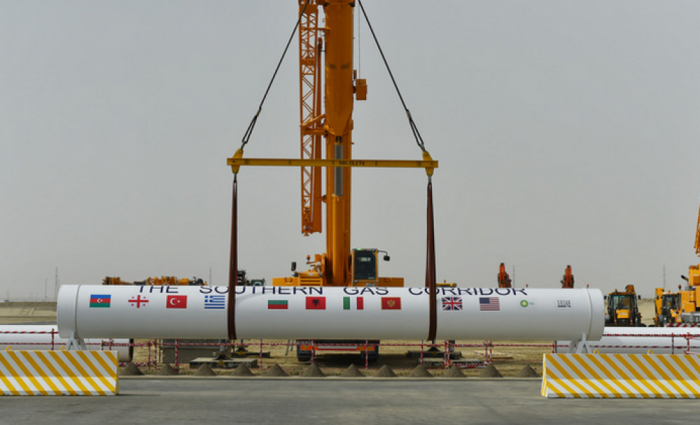 BP together with SOCAR and ADA University today presented a research book on the importance of the Southern Gas Corridor (SGC) – a series of pipelines that will commence delivering the Caspian gas to Europe later this year. The pipeline is the first ever direct link to connect the gas fields in the Caspian with the markets in Europe, Azertag reports.

The research activities and the publication of the book have been funded by BP Azerbaijan as part of the company’s efforts to support the global energy transition processes.

The book consists of eleven chapters contributed by ten well-known national and international authors with deep knowledge and understanding of the various countries, markets and energy developments related to SGC. The book is written in English and there are also plans to have it translated into Azerbaijani for the benefit of the national audience in Azerbaijan – the country where SGC starts and the country which will initially supply gas into SGC.

Bakhtiyar Aslanbayli, BP’s communications and advocacy vice president for the Middle East and Caspian Region, said in his address to the special event held today in Baku on the occasion of the public presentation of the book: “BP is involved in every single section of this huge gas value chain of which SGC is a major part. Therefore, it is natural that we decided to support this valuable research and analysis of the circumstances and situations related to SGC and the future of gas in the low carbon world. I believe the book is a valuable guide to the in-depth understanding of the importance of SGC at this time when this great infrastructure is approaching its full start-up in a few months. I would like to thank all the authors for sharing their deep knowledge about the topics related to SGC and the regions involved in this great project.”

Gulmira Rzayeva, editor of the book and one of the ten authors, said: “The book came very timely when the natural gas markets have been going through an unprecedented transformation in the energy transition era. Natural gas in general and pipeline projects such as the Southern Gas Corridor in particular have the important part to play in this transition, greatly contributing to European supply security. The book contains many excellent contributions by eminent scholars in the field of natural gas market and the Southern Gas Corridor.”

Prof. Kostas Andriosopoulos, editor and one of the ten authors, said: “I am delighted to celebrate the launch of the publication entitled “The Southern Gas Corridor and its importance for South-East Europe / The new Era of Energy Transition”, a book focusing on the pivotal project of Southern Gas Corridor and the role of natural gas as the ideal transition fuel, in an era when the EU seeks to decarbonize its economy and secure its energy supply.”

In Azerbaijan, BP has been present for about 28 years safely, efficiently and reliably operating major oil and gas exploration, development and transportation projects. To date, it has invested together with its partners around $76 billion into projects in the country and has had a positive impact on local communities through generating tens of thousands of jobs and through its extensive social investment activities directed at building local capabilities, education, development of communities, local enterprises, sporting potential as well as research and promotion of the country’s rich cultural heritage.

In Azerbaijan, BP directly employs more than 2,500 Azerbaijani citizens who make over 90 per cent of the company’s professional staff.

Over the past 28 years BP and its co-venturers have supported a large number of major social investment projects. These have included educational programmes, building skills and capabilities in local communities, improving access to social infrastructure in communities, supporting local enterprises through provision of access to finance and training, support for cultural legacy and sport, as well as technical assistance to public institutions.