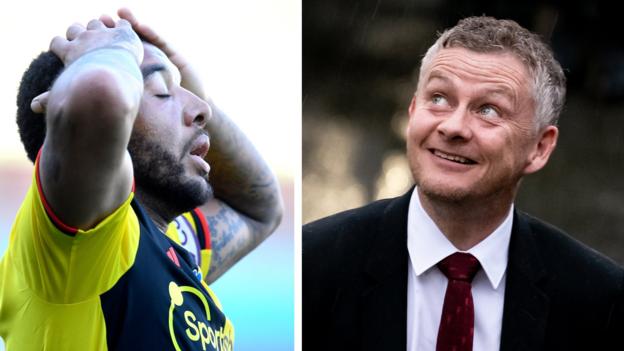 Champions League qualification and the battle to avoid relegation are the major issues at stake as the Premier League season concludes on Sunday.

Coronavirus prompted fears the campaign might not be completed but after 92 games in 40 days the top flight is set for a dramatic finale.

Two of Aston Villa, Watford and Bournemouth will be relegated.

Europa League qualification is also up for grabs, with Wolves and Tottenham battling for sixth place, which guarantees a European place next season.

Jamie Vardy is favourite to win the Golden Boot, while the Golden Glove is also up for grabs.

Manchester City's Kevin de Bruyne will be hoping to match - or break - an assists landmark only previously achieved by Thierry Henry, plus the Premier League will bid farewell to a legend as De Bruyne's City team-mate David Silva plays his final match in the competition.

Heartbreak and tears - who will go down?

Remember in normal times when the television cameras loved zooming in on sobbing fans after their club had been relegated?

With supporters unable to attend games because of the coronavirus pandemic, that is not going to happen this season.

But fans of Bournemouth, Watford and Aston Villa are preparing for a nerve-shredding day as their clubs look to avoid joining Norwich in the Championship.

After a long slog of a season, three teams separated by three points and with almost identical goal differences, are left to battle for one Premier League place.

Villa, who start the day outside of the bottom three on goal difference, visit a West Ham side who are now safe, 18th-placed Watford go to FA Cup finalists Arsenal, while 19th-placed Bournemouth are at mid-table Everton.

"We can control our own destiny and that was looking unlikely," said Villa boss Dean Smith, whose side moved out of the bottom three with one game to go.

"We are above the dotted line but the most important thing is to be there after the game on Sunday."

Sports data analysts Gracenote have used their Euro Club Index to work out the chances of relegation for those teams trying to stay up.

The Cherries may be favourites for the drop as they are reliant on both their relegation rivals losing - but manager Eddie Howe believes keeping a cool head is crucial.

"Thinking too much, or getting too emotional, can be very counter productive so we need the players to enjoy the game, play the game as they have always done.

"I'm sure at some stage I will hear what's happening elsewhere. But we have to win regardless, so that's what I'll be working on."

"If we need to get messages onto the pitch we will but they just need to concentrate on their jobs," he said.

With all of Sunday's games kicking off at 16:00 BST, expect tears to be flowing around 17:50 - just not from fans in stadiums, as we have become used to on the last day of the league season.

For a detailed explanation of the permutations at the bottom, click here.

Passports at the ready - who will make Europe?

With champions Liverpool and runners-up Manchester City having booked their places in next season's Champions League, Chelsea, Leicester and Manchester United are battling it out for the final two group-stage spots.

United, who are third, will guarantee a top-four finish if they avoid defeat at fifth-placed Leicester. FA Cup finalists Chelsea, who are one point clear of Leicester, just need a point against sixth-placed Wolves to secure a place. Leicester will guarantee a spot in the top four by beating Manchester United.

"We'll approach the game to win it - I don't think there's any other way," said Chelsea boss Frank Lampard.

Meanwhile, Wolves will qualify for the Europa League for a second successive season if they win at Chelsea.

Ole Gunnar Solskjaer's United were six points off the top four after a 2-0 home defeat by Burnley on 22 January. They go into the final day with an 88% chance of making the Champions League, according to Gracenote, as do Chelsea. Leicester's chances are rated at 70%.

"We want the players to learn about the traditions and history of the club and what the players before them have done," Solskjaer told Sky Sports.

"The club's former players have played so many vital games at the end of the season - a cup final, a game to win the league, a game to get into the Champions League.

"The players now are learning what the other players through history have been through."

Leicester manager Brendan Rodgers said: "This is virtually like a barrier-breaking goal, a goal that will get us into the Champions League.

"It wasn't really something we spoke about at the beginning of the season because naturally, where the club had been these last few seasons, we wanted to try step-by-step to arrive there."

Click here for a more detailed explanation of the race for the Europe.

Eight years ago, Jamie Vardy was playing non-league football for Fleetwood Town. On Sunday, the Leicester striker could win the Golden Boot awarded to the leading Premier League scorer.

Vardy, 33, is top of the scoring charts with 23 goals, two ahead of Southampton's Danny Ings, his nearest rival for the award.

While Vardy goes into the Foxes' final game at home to Manchester United without a goal in his past two appearances, Ings has scored six times in eight matches since the restart for Southampton, who entertain Sheffield United.

Jamie Vardy: the Fleetwood Town story
Should Vardy and Ings seal the top two places, it will be the first time two English forwards have finished top of the scoring charts outright since 1999-2000, when Sunderland's Kevin Phillips scored 30 and Newcastle's Alan Shearer got 23.

With Manchester City's Raheem Sterling on 19 goals, there is a chance English forwards could fill the top three places, although Arsenal's Gabon striker Pierre-Emerick Aubameyang (20) and Liverpool's Egypt forward Mohamed Salah (19) might have something to say about that.