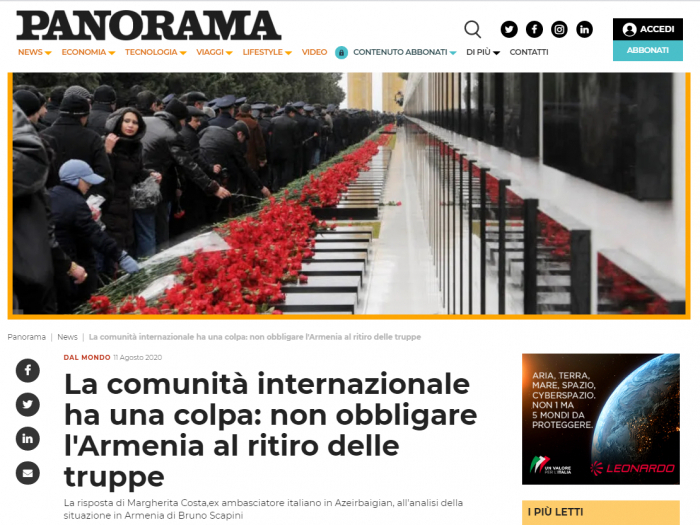 Panorama, an Italian news magazine, has published an article, titled “The fault of the international community is a failure to force Armenia to withdraw its troops”, by Margarita Costa, the former Italian ambassador to Azerbaijan and Azerbaijan’s Honorary Consul in Genoa.

In her article, Costa gave an adequate response to the biased remarks by Bruno Scapini, former ambassador of Italy to Armenia, Honorary Chair to Armenian-Italian Association for Commerce and Industry, in connection with the Armenia-Azerbaijan Nagorno-Karabakh conflict and Armenia’s latest military provocations on the border with Azerbaijan.

"Azerbaijan is victim of the protracted aggression and the international community should take action to end this once and for all," Costa wrote in her article.

Margarita Costa regretted to respond to her colleague over the fact that Bruno Scapini misled his readers with little knowledge of the Armenian-Azerbaijani Nagorno-Karabakh by misrepresenting the truth in his recent articles.

"I can understand Skapini's feelings for Armenia. However, the deepest feelings should not prevail the obvious and internationally recognized mistakes. I would expect someone, whose profession is diplomatics to have more respect to the international law. It is the very international law that justifies Azerbaijan, which has been under military occupation by Armenia for almost 30 years with more than one million refugees and internally displaced persons. Armenia has serious crimes like the Khojaly genocide on its shoulders," Costa noted in her article.

"I agree with my colleague that the international community has a responsibility. However, its responsibility is to enforce Armenia to comply with the international documents, including four resolutions of the UN Security Council demanding the withdrawal of its armed forces from Azerbaijani territory. As a result of Armenia's policy against Azerbaijan, Armenia missed the opportunity to participate in the regional processes. Currently Armenia faces the deep economic and social difficulties, which are primarily caused by this issue. Thus, if Armenia did not occupy Azerbaijani today, it could participate in gas export and other projects of transport infrastructure," Costa also wrote in the article.

Margarita Costa also invited Scapini to visit Azerbaijan, which has a rich culture, history and generous people, underlining the fact that Azerbaijan is a reliable partner for Europe, especially Italy.

"Perhaps the former ambassador will realize the true meaning of the word "victim" after seeing the consequences of the Armenian occupation with his own eyes and speaking with people, who have been waiting for thirty years to return to their homes in the Nagorno-Karabakh and 7 surrounding regions of Azerbaijan. Azerbaijan is a victim of a protracted aggression, and the international community should take action to end this once and for all," Costa concluded her article.

The original article is published HERE .