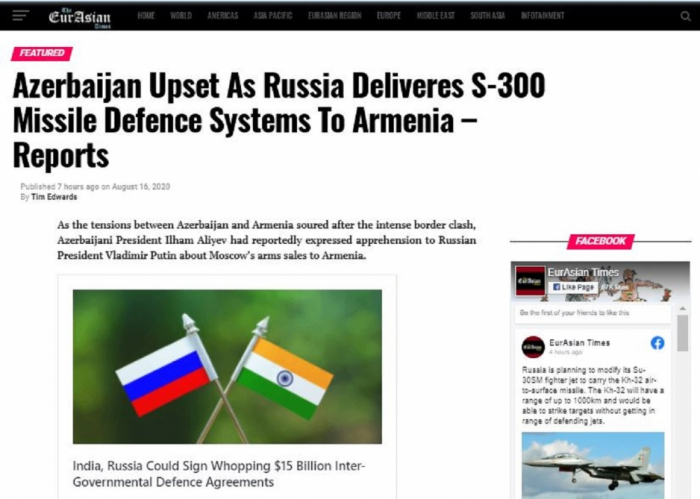 "As the tensions between Azerbaijan and Armenia soured after the intense border clash, Azerbaijani President Ilham Aliyev had reportedly expressed apprehension to Russian President Vladimir Putin about Moscow’s arms sales to Armenia.

Aliyev and Putin spoke by phone and the Azerbaijan leader expressed anxiety over enormous arms shipments from Russia to Armenia, which the Azerbaijani president said: “raises concerns and serious questions in the Azerbaijani society.”

“The main goal of the conversation was to clarify this question,” Aliyev’s press service said in an August 13 release.

Aliyev was commenting to reports the week before in Azerbaijani media that several tons of weapons were dispatched from Russia to Armenia between July 17 and August 4. (Aliyev told Putin it was 400 tons, though other reports said it was 280 tons.)

The flights, using an IL76 military cargo plane, reportedly took a roundabout route from the southern Russian city of Rostov-on-Don to Armenia, avoiding the direct route – over Georgia.

Russian arms for Armenia are not unusual: The two countries are allies via the Collective Security Treaty Organization (CSTO) and Russia has long provided Armenia with weapons. But Azerbaijanis protested to the scale and timing of these consignments.

Aliyev’s message to Putin was a slightly different one; he said that “the main purpose of Armenia’s military attack was to draw third countries into the Armenian-Azerbaijani conflict,” though he didn’t elaborate which third countries he was referring to.