Silence against Armenian provocations and attacks encourages them - Turkish Ambassador to U.S, EXCLUSIVE 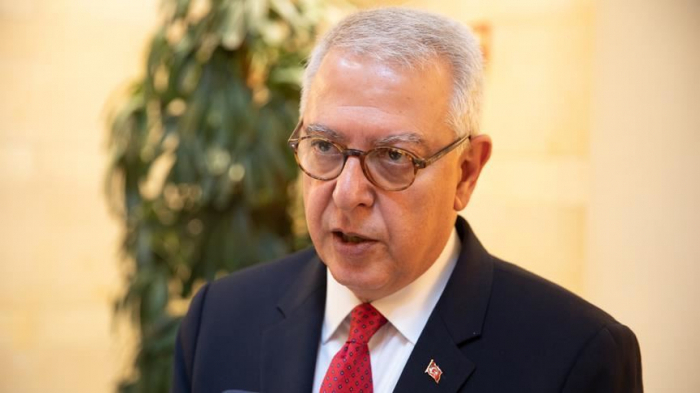 Turkish Ambassador to the United States Serdar Kilic gave an exclusive interview to Azvision.az. In his interview, the ambassador answered questions on  the Armenian provocations committed in Tovuz direction, the Armenian attacks on peaceful Azerbaijanis in Los Angeles, the joint activities of the Azerbaijani and Turkish diasporas and other important issues.

The ambassador condemned Armenia's attack on Azerbaijan's Tovuz region and extended his condolences to the families of the martyrs.

“The events in Azerbaijan’s Tovuz region clearly showed that Armenia is a country which threatens the stability of the region with its aggressive nationalism. As Turkey, we always stand by Azerbaijan strongly condemning the Armenian aggression. All the statements made by Turkish President, Minister of Foreign Affairs as well as the Defense Minister support brotherly Azerbaijan,” Ambassador noted.

“As you know, ASALA - the Armenian terrorist organization made its first attack in Los Angeles, where I used to work. Our Consul General Mehmet Baydar and his deputy Bahadir Demir were assassinated by Armenian terrorist on Jan.27, 1973. In this regard, Armenian aggression in the United States, their actions targeting Turkey and Azerbaijan are not new, it has a historical background.

The silence against Armenian aggression and provocation in the United States and Europe encourages them even more. They have attacked the citizens using the right to peaceful demonstration, the Turkish and Azerbaijani diplomatic representatives and their buildings. Armenia and the Armenian Diaspora know that the "genocide" allegations are false, they have illegaly occupied Nagorno-Karabakh violating the international law,  they are the ones who committed provocations in Azerbaijan’s Tovuz district.They try to cover up these injustices and mistakes by shouting, committing incidents and attacking innocent civilians,” Ambassador said, commenting on Armenian attacks on peaceful Azerbaijani protestors in Los Angeles.

“We hope that the issue will be investigated objectively and perpetrators will be identified. Perpetrators must be punished to prevent such incidents in future. Besides, all those who spread hate messages and threats on social media  must be severely punished,” Sardar Kilic also stated.

“Turkey has been a member of the Minsk Group since its establishment and has been actively involved in its activity. Surely, we expect a peaceful settlement of the Nagorno-Karabakh conflict within the framework of Azerbaijan's sovereignty and territorial integrity in accordance with international law and norms. The OSCE Minsk Group co-chairs made rapid progress after the Tovuz attack and accelerated mediation efforts. However, it is worrying that the occupation has continued for the past 28 years since the establishment of the Minsk Group and no significant progress has been made", the Ambassador said while commenting on Turkey's co-chairmanship in the OSCE Minsk Group.

Ambassador Serdar Kilic reiterated Turkey’s support for the peace, stability and development in the Southern Caucasus.  He also touched on the importance of the using the energy resources and transport lines in the region for improving the welfare of the people: “Turkey implemented joint projects cooperating with Azerbaijan and Georgia to improve the welfare of the people. The USA also made contributions to these projects. However, Armenia could not benefit from these projects because of its aggressive policy and keeping Azerbaijani territories under occupation. We expect the US and the international community to compel Armenia to obey the international law norms respecting the sovereignty and territorial integrity of its neighbouring countries”.

Kilic also emphasized the contributions of Turkey-US partnership to the peace and stability starting from Balkans to Afghanistan.