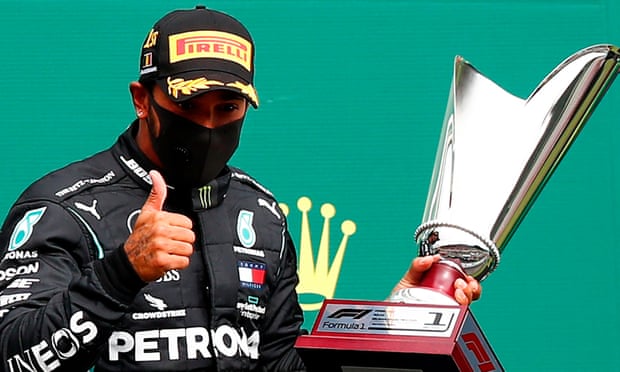 Lewis Hamilton has admitted that were he only a fan of Formula One he would probably tune in just for highlights of races given the dominance he and Mercedes are demonstrating this season.

After a controlled victory at the Belgian GP, Hamilton’s fifth of the season and Mercedes’ sixth from seven races, the world champion believed the spectacle was lacking compared to when he watched Michael Schumacher’s domination as a teenager. However, he insisted it is up to the rule makers to improve the competition.

Hamilton led every lap of the race from pole and his lead was not threatened. He finished eight seconds clear of his teammate Valtteri Bottas, with Max Verstappen a further seven behind in third. The race at the front was processional to such an extent that Verstappen repeatedly bemoaned how boring taking part in it was.

“When I was a teenage kid I would have woken up, had my bacon sarnie, watched the start and gone to sleep then woken up to watch the end,” Hamilton said. “If I was watching today I would do the same most likely and watch the highlights because they are much shorter.

“Having grown up watching the Schumacher era, of course I know what it is like. I feel the same as Max, it was not the most exciting. I enjoy it myself in the car because if you don’t enjoy the moment what’s the point in doing it? I am still able to enjoy the battle but perhaps it is not as much fun for people to watch. When you are in it it is different, but of course I would love a wheel-to-wheel race.”

Schumacher won five consecutive championships for Ferrari between 2000 and 2004. Hamilton has scored five in seven years with Mercedes and is on course for another. He insisted that the major regulation change with redesigned cars for 2022 would represent a great opportunity for the sport.

“What fans and people need to understand is this is not our fault, we are drivers, we have come through all the ranks, we have earned the positions we have,” he said. “We give everything to go out there and perform at our best. Ultimately the decision-makers who design cars, set rules, are the ones you could apply pressure to ultimately do a better job. I am hopeful that is what they are going to do in 2022.”