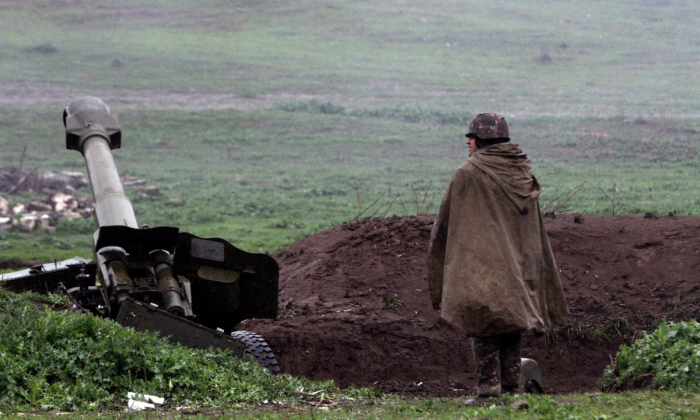 Early on Sunday morning at around 06.00 local time, hostilities in the occupied territories of Azerbaijan erupted. Local media reported Armenian artillery fire raining down on military and civilian targets along the frontline areas.

The villages of Gapanly, Chiragli and Orta Gervend in the Aghdam district, Alkhanli, Shukurbeyli in the Fizuli district, and Jojug Marjanli in the Jabrayil district were hit by Armenian troops, and all reported casualties, although at the time of writing there are as yet no firm details.

Shortly thereafter, the Armenian government declared Martial Law, and issued a general mobilisation call for persons under 55 years of age.

Azerbaijan responded quickly, its forces restoring control over the Fizuli and Jabrayil districts.

In the early afternoon, President of the Republic of Azerbaijan Ilham Aliyev addressed the nation.

This morning, the Armenian armed forces fired on our settlements, as well as our military positions, using various types of weapons, including heavy artillery, from several directions. There are casualties among the civilian population and our servicemen as a result of enemy fire. May God rest our martyrs in peace! Their blood will not remain unavenged. The Azerbaijani Army is currently firing on the enemy's military positions, and as a result of these strikes, many pieces of the enemy's military equipment have been destroyed.

By late afternoon the Military command of Azerbaijan offered terms of surrender to the Armenian garrison at Agdhara to lay down their arms in order to avoid further loss of life, stating that prisoners of war and civilians would be treated in accordance with the requirements of the Geneva Convention and other norms of international law.

Both sides have reported military and civilian casualties; by early evening on the first day of hostilities early reports indicated that an Azerbaijani family of five perished in shelling launched by Armenian separatists.

The Defence Ministry said in a statement that the Azerbaijani city of Terter had been under fire from Armenian forces since early Sunday morning.

The Ministry of Defence issued a final warning to Armenia that adequate retaliatory measures will be taken against them if needed it said.

Hikmet Hajiyev, Head of Foreign Policy Affairs of Azerbaijan’s Presidential administration referred to the apparent deliberate targeting of civilian targets, drawing parallels with the Khojaly massacre of 1992 when hundreds of Azerbaijani civilians were killed by Armenian forces. After the atrocity, the NGO Human Rights Watch stated that "there are no exact figures for the number of Azeri civilians killed because Karabakh Armenian forces gained control of the area after the massacre."

President Aliyev, solemnly addressing a special plenary meeting of the autumn session of the Milli Majlis of Azerbaijan, announced that due to the military situation a state of martial law was to be imposed in some cities and districts of the country from midnight.

Charles Michel, President of the European Council, meanwhile called for an immediate return to negotiations. 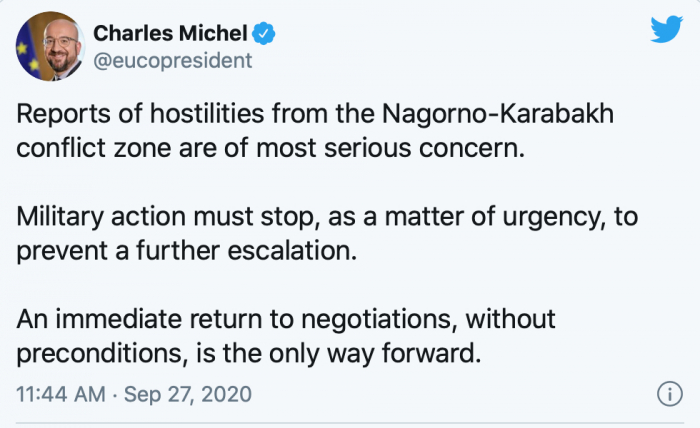 Nagorno-Karabakh: a region of Azerbaijan.

Nagorno-Karabakh is internationally recognised as being a region of Azerbaijan but has been under the occupation of Armenia since the 1990s.

In 1993 four UN Security Council Resolutions called for Armenia to withdraw its military forces from Nagorno-Karabakh.

In a 2005 report authored for the Political Affairs Committee of the Parliamentary Assembly of Europe (PACE), British parliamentarian and rapporteur David Atkinson, stated "the borders of Azerbaijan were internationally recognised at the time of the country being recognised as independent state in 1991," and "the territory of Azerbaijan included the Nagorno-Karabakh region."

In January 2016, PACE adopted Resolution #2085 acknowledging this status, and calling for "the immediate withdrawal of Armenian armed forces from the region."