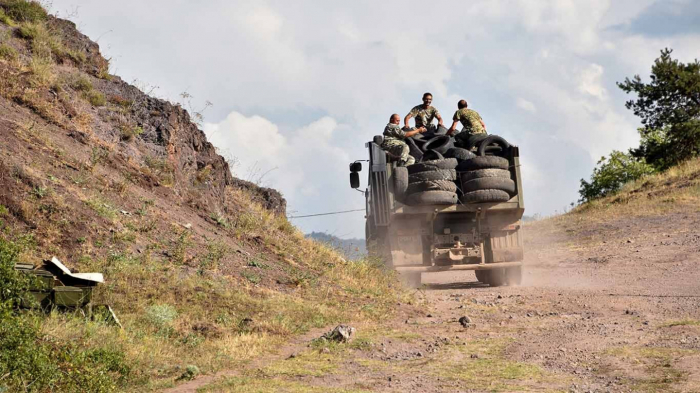 The violation of the ceasefire regime was a deliberate act by the Armenian armed forces. The conflict erupted when the Armenian armed forces initiated intensive shelling on the Azerbaijani armed forces and used deadly weapons such as mortars and all sorts of artillery causing serious damages to the civilian infrastructures and causalities of both military personnel and the unarmed civilians residing in the populace communities along with Qapanli village of Terter region, Chragli and Orta Garvend villages of Aghdam, Alkhanli and Shukurbeyli villages of Fizuli, and Jojuq Merjanli village of Jabrayil districts.

Nagorno-Karabakh conflict is considered as one of the oldest territorial disputes in the world. The clashes erupted from the dispute over the Armenian-majority Nagorno-Karabakh region, which is internationally recognized as the territory of Azerbaijan and is presently held under the self-proclaimed Republic of Artsakh governed by ethnic majority Armenians who reject the Azerbaijani rule. Nagorno-Karabakh is a geographical area near the border between Armenia and Azerbaijan. Today the vast majority of the population of Nagorno Karabakh is Armenian. The region holds strategic significance due to the abundance of numerous minerals and hydrocarbon reserves. The neighboring former Soviet Republics have long been contesting over the territory and have also fought a war over it that culminated in 1994 with an internationally- brokered ceasefire. Despite the conflict ended, peace negotiations have stalled, and both the states engaged in military skirmishes that erupt frequently. Despite the United Nations Security Council Resolution (822, 853, 874, and 884) pertaining to the issue, declaring the area as a formal part of Azerbaijan and calling for the withdrawal of the Armenian forces, Armenia continued to violate the ceasefire and have provoked the offense even in the past. Armenia is openly flouting these resolutions and is rigorously pursuing and demonstrating no hopes for the optimism that Armenia will commit to peace negotiations.

The long-simmering tensions between Armenia and Azerbaijan over the contested region of Nagorno-Karabakh is unresolved even after three decades now and multiple violations of the ceasefire have occurred at the border between both the states and the most recent one is in September 2020 with the casualties at both ends following the July 2020 clashes. The recent provocation is a sequel of the July 12-14 attack against Azerbaijan on the international border which was well retorted by Azerbaijan’s military forces. The July aggression was launched along the international border towards Tovuz district having numerous energy and infrastructure projects nearby, thus clarifying Armenian intentions to pursue “New Wars for New Territories” – as claimed by the Armenian Defence Minister in 2019. Since July Offense, Azerbaijan has expressed its concerns regarding the future provocation of the offensive by the Armenian forces along the international border. Despite the temporary interval over a couple of months the situation nevertheless remained tense with sporadic violations of the ceasefire. During this period, Armenia purposefully provoked tensions and intensified its activities to sabotage the peace and security along the frontline.

To pursue their malicious intentions and offense, Armenia has declared martial law and full military mobilization. The current leadership of Armenia has opted for the political provocation, nationalistic statements, and cultural revanchism embodied with future resentment to pursue their foreign policy objectives of the Armenia-Azerbaijan conflict. Several provocative actions were taken by the Armenia that includes Nikol Pashinyan’s statement claiming Karabakh as a part of Armenia and also provoking Armenians to “Get ready to defend (our) sacred homeland” coupled with revanchist ideology. Contrary to the norms and principles of the international law, and the Fourth Geneva Convention, Armenian leadership also declared the illegal settlement of more than 100-150 Armenian families from Lebanon in the occupied Azerbaijani territories, including Shusha, which holds deep emotional and cultural importance for Azerbaijan. Thus, presenting a vivid example of an intense cultural revanchism employed by the current leadership of Armenia.

However, Azerbaijan’s military forces have stand guard to protect their territory and civilians from the Armenian offense. As a response to the attack by the Armenian armed forces, President Ilham Aliyev has ordered a large-scale counter-offensive operation and due to the preparedness and valor of the Azerbaijanian Military forces, he is hopeful for Azerbaijan’s success to end this illegal occupation by Armenia. The counter-offense measures taken by Azerbaijan’s military forces are proving to be fruitful and the country is fighting with its full potential. Azerbaijan’s Ministry of Defence has reported to capture commander of the Armenian sabotage group and also claimed to destroy several tactical UAV’s of Armenia. The blitz counter-offensive operation of the Azerbaijan Army continues by using military personnel, tank units, Rocket and Artillery Troops, frontline aviation, and unmanned aerial vehicles (UAVs). Though the clashes are still going on, however, the retaliatory actions taken by Azerbaijan’s army has proved to be effective and the military has been able to control the operational situation.

The response of the International Community

Efforts are being made to encourage a peaceful and negotiated resolution of the conflict between Azerbaijan and Armenia over the Nagorno-Karabakh region. The Organization for Security and Cooperation in Europe (OSCE) Minsk group released a statement to condemn “the use of force and regret the senseless loss of life, including civilians” and appeals “to the sides to cease hostilities immediately and to resume negotiations to find a sustainable resolution of the conflict.” The international community including, the European Union, the United Nations, the Organization for Security and Cooperation in Europe, and the Turkic Council called for immediate ceasefire and de-escalation and also suggested negotiations for peace and stability in the region. Furthermore, the representatives of several countries called for the peaceful resolution of the conflict with Pakistan and Turkey expressing their support for Azerbaijan.

The armed conflict between Armenia and Azerbaijan will have negative impacts on regional security dynamics. To ensure peace and stability, Armenian political and military leadership needs to accept the de-jure rule of Azerbaijan over the disputed territory. Armenia should regard the UNSC resolution as they are not time-specific and are valid until their implementation.