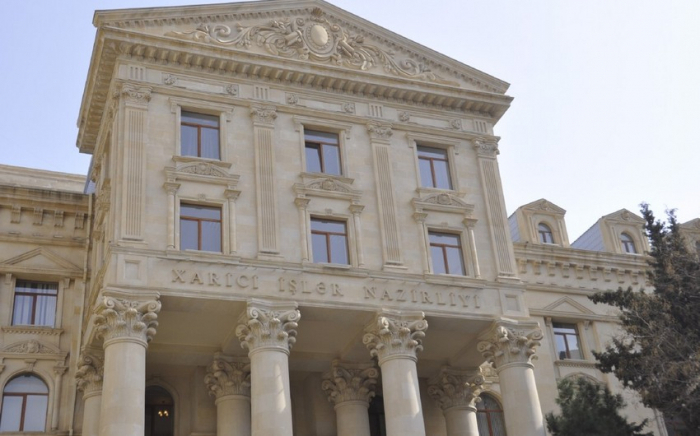 Armenia in an attempt to compensate serious losses it has been inflicted in the course of the counter-offensive operations of the armed forces of the Republic of Azerbaijan to repel the armed aggression of the armed forces of Armenia and to protect Azerbaijani civilians takes steps to involve foreign nationals, mainly of Armenian origin into its armed units illegally deployed in the temporarily occupied territories of Azerbaijan.

According to information available to the Azerbaijani side, including that from open media resources, thousands of ethnic Armenians from Syria, Lebanon, Russia, Georgia, Greece, United Arab Emirates and other countries have already been either deployed or are in the process of deployment to the occupied territories of Azerbaijan. In most cases, the Government of Armenia and Diaspora organizations in third countries make calls on Diaspora members to expeditiously join armed units of Armenia in the occupied territories of Azerbaijan. Ticket sales campaigns are being organized and special assembling points are being defined for that purpose.

In addition, certain Diaspora organizations operating under disguise as charity or non-governmental entities raise funds and collect other material means among the Diaspora members to be sent to the armed units of Armenia involved in the attacks against the civilian population of Azerbaijan. The Ministry recalls that under the UN Security Council Resolution 2178 (2014) “individuals who travel to a State other than their States of residence or nationality for the purpose of the perpetration, planning, or preparation of, or participation in, terrorist acts or the providing or receiving of terrorist training, including in connection with armed conflict” are defined as “foreign terrorist fighters”.

Armenia and Armenian Diaspora organizations bear international legal liability for organizing these terrorist activities against Azerbaijan and its civilians.

At the same time, the states in the territories of which these terrorist activities are being organized or financed, also bear responsibility under international law, as well as in accordance with their own national legislation.

According to the relevant operative paragraphs of the above-mentioned resolution and the UN Security Council Resolution 2396 (2017), which are legally binding under the Charter of the United Nations, the UN Member States shall prevent the movement of terrorists and terrorist groups by effective border controls and undertake necessary punitive measures under their penal legislation.

In addition to their obligations deriving from international law and national legislation, the states of origin should also bear in mind that these “Armenian terrorist fighters”, once being able to return to their countries of origin, would represent a serious threat to their societies as persons involved in terrorist training.

In view of the above-mentioned, Azerbaijan strongly urges all states, origin or transit, to exercise due diligence in light of the increased intensity of travel by their nationals to Armenia and put in place necessary preventive border control measures, as well as take all steps required for not allowing their territories to be used for supporting or financing terrorist activities against the sovereignty and territorial integrity of the Republic of Azerbaijan and its civilian population.

The Azerbaijani side is determined to take all measures stemming from its rights under relevant bilateral and multilateral mechanisms with a view to curbing terrorist activities within its internationally recognized territories and against its civilian population and bring the perpetrators to justice.