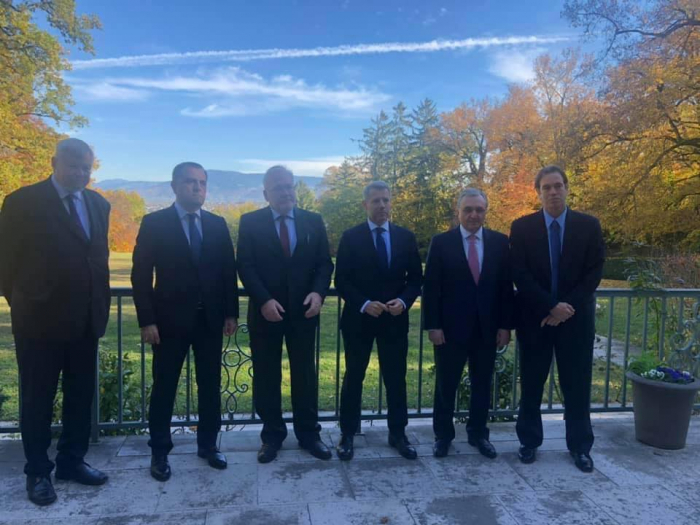 A meeting between Azerbaijani Foreign Minister Jeyhun Bayramov and his Armenian counterpart Zohrab Mnatsakanyan kicked off in Geneva.

The meeting is taking place through the mediation of the OSCE Minsk Group co-chairs.

Andrzej Kasprzyk, the Personal Representative of the Chairperson-in-Office, is also attending the meeting.

The foreign ministers of Armenia and Azerbaijan arrived in Geneva for talks on Friday to resolve a conflict in Nagorno-Karabakh, where hundreds have been killed in more than a month of fighting.

The ministers are set to meet envoys from France, Russia and the United States, co-chairs of the OSCE Minsk Group charged with resolving a conflict that has escalated in recent days, diplomats in the Swiss city told Reuters.

The foreign ministries of Armenia and Azerbaijan both confirmed that their respective ministers had arrived in Geneva.

Human rights groups called for an immediate halt to the use of banned weapons after confirming the use of cluster munitions by Armenia in an attack on the Azeri city of Barda.

On the eve of a meeting of the Foreign Ministers of Azerbaijan and Armenia in Geneva, Switzerland, the OSCE Minsk Group co-chairs exchanged views on the settlement of the Nagorno-Karabakh conflict, AzVision.az reports.

The meeting of the ministers will be closed to the press. It is unknown for now whether a statement will be issued at the end of the meeting.

Note, Azerbaijan and Armenian FMs will meet in Geneva today.