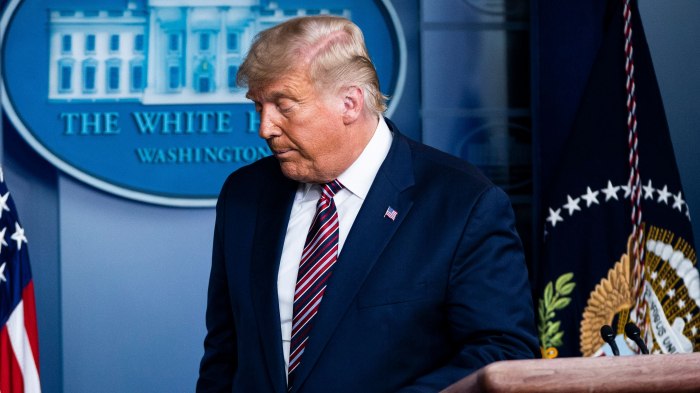 Whether it is deaths from Covid-19 or his own election defeat, admitting loss is something Trump finds impossible to do.

It could be considered a small thing that Trump can neither meet with Biden nor acknowledge that he has lost the election to him. But what if the refusal to acknowledge loss is bound up with the path of destruction we call Trump’s exit route? Why is it so hard to lose? The question has at least two meanings in these times. So many of us are losing people to Covid-19, or fearing death for ourselves or others. All of us are living in relation to ambient illness and death, whether or not we have a name for that sense of the atmosphere. Death and illness are quite literally in the air. And yet, it is unclear how to name or fathom these losses, and the resistance of Trump to public mourning has drawn from, and intensified, a masculinist refusal to mourn that is bound up with nationalist pride and even white supremacy. The Trumpists tend not to grieve openly pandemic deaths. They have conventionally rejected the numbers as exaggerated (“fake news!”) or defied the threat of death with their gatherings and maskless marauding through the public spaces, most recently in their spectacle of thuggery in the US Capitol in animal costumes. Trump never acknowledged the losses the US has suffered, and had no inclination or capacity to offer condolences. When the losses were referenced, they were not so bad, the curve was flattening, the pandemic would be short, it was not his fault, it was China’s fault. What people need, he claimed, was to get back to work because they were “dying” at home, by which he meant only that they were driven crazy by domestic confinement.

Trump’s inability to acknowledge his election loss is related to his inability to acknowledge and mourn public losses from the pandemic, but also his destructive itinerary. If he were to have openly acknowledged his electoral loss, then he would be someone who loses. He is just not the kind of guy who loses, and if he does, then someone took what was rightfully his. But there is a further twist. The white supremacists who stormed the Capitol are also convinced not only that the elections were stolen, but their country as well, that they are being “replaced” by black and brown communities, by Jews, and their racism fights against the idea that they are being asked to lose their idea of white entitlement and supremacy. To this end, they transport themselves back in time to become Confederate soldiers, they occupy fantasy figures on video games with superhuman powers, they dress as animals and bear guns openly, reliving the “wild west” and its genocide of indigenous peoples. They also understand themselves as “the people” and “the nation” which is why they are still in some shock as they are arrested for felonies. How could this be trespass or sedition or conspiracy if they were only reclaiming “their house”? How could this be a crime if the president asked them to undertake these acts? Those who sought to find, kill or kidnap elected officials had clearly violent plans, ones well-documented on their various internet sites and unheeded by complicitous police officials. And the attack on police and even the death by crushing of one of their own, Rosanne Boyland, went unheeded in the excitement of their lethal rampage.

And it may also be that Trump’s own final killing spree, taking the lives of 13 people since federal executions resumed in July 2020, is another example of the readiness to kill that marks these final days. Where there is a ready-made refusal to acknowledge the loss of lives, killing presumably becomes easier. These lives are not quite grasped as lives, and their loss does not really count as significant. In this way, Trump’s final days, including the Capitol assault, are a violent rejoinder to Black Lives Matter. Globally, millions took to the streets to oppose in outrage police taking of black lives with impunity, forming a movement that exposed historical and systemic racism, and opposed the ease with which police and prisons destroy black lives. That movement continues to pose a global threat to white supremacy, and the reaction has been violent and vile. The supremacists do not want to lose their supremacy, even though they have already lost it and continue to lose it as movements for racial justice continue to achieve their aims. Trump’s loss is as unthinkable as their own, and this is doubtless one of the ties that bind them to his delusive conviction of a stolen election.

Before the assault on the Capitol, it was surely worrisome or even humorous that Trump manically sought to nullify his losses by any means possible. But this makes sense if we think about a general inability to acknowledge loss, an acknowledgment, Freud tells us, that is the work of mourning. To mourn, though, there has to be a way to mark that loss, a way to communicate and register it and, in this sense, it requires communication and at least the potential of public assent. The formula goes something like this: I cannot live in a world in which the object I value is lost, or I cannot be the person who has lost what I value. I will destroy the world that reflects back to me that I have lost, or I will leave that world through recourse to fantasy. This form of denial would rather destroy reality, to hallucinate a preferred reality, than register the verdict of loss that reality has to deliver. The result is a form of destructive rage that does not even bother to offer a moral alibi. The issue is made clear in the rash of death sentences, state-sanctioned murders, but also the waving away of the numbers of those who have died of Covid-19, especially those numbers that show us communities of color are most adversely affected, including the indigenous populations of this land who are hardest hit. It makes cruel sense that Trump would make a deal in his final days in office that destroys sacred sites in Arizona to boost the production of copper at the very time that the failure of public policy has surely increased the death toll for those communities.

White supremacy has now resumed an open place in US politics, and Trumpism will outlast Trump, and continue to assume new forms. White supremacy is a political fantasy, but also a historical reality. It can be understood in part as a refusal to grieve the loss of white supremacy that the movement for black lives and the ideals of racial justice rightly demand. So it’s time for the racists to grieve that loss, but it is doubtful that they will. They know that what they imagine to be their natural right can be taken away, is being taken away, and the struggle they are waging is historical. They will live out their fantasy until historical reality checks them. Let us hope that the Biden rejoinder is not to intensify the police state for this purpose. That would be a cruel irony.

Judith Butler is Maxine Elliot professor in the department of comparative literature and the program of critical theory at the University of California, Berkeley. Her latest book is The Force of Nonviolence (Verso)