Iranian diplomat sentenced to 20 years in Belgium over bomb plot 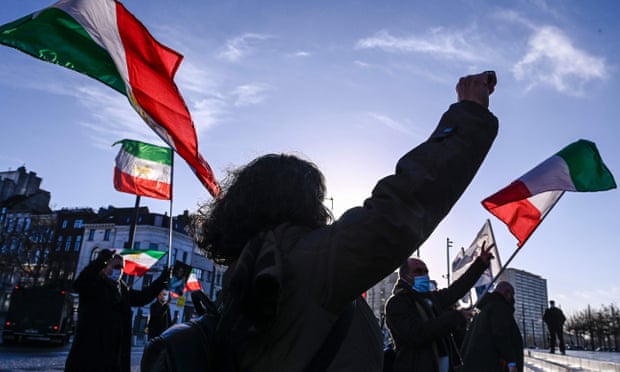 People gesture and wave former flags of Iran as they protest outside the Antwerp criminal court. Photograph: Belga/AFP/Getty Images

An Iranian diplomat who masterminded a failed bomb attack at a rally outside Paris attended by five British MPs has been sentenced to 20 years in jail by a Belgian court for attempted murder and involvement in terrorism.

Assadollah Assadi, 49, had been attached to the Iranian mission in Vienna when he supplied explosives for the intended atrocity at an Iranian opposition rally in France in 2018.

The courtroom was heavily guarded during sentencing, with armoured vehicles outside and police helicopters overhead, despite Assadi refusing to appear at any point in the trial.

Assadi, believed to be an officer of the so-called department 312 in Iran’s intelligence and security ministry, had warned authorities last year of possible retaliation if he was found guilty.

“This would have been an attack on the democratic state of law and freedom of speech,” the judge in Antwerp said. “When the army bomb squad wanted to make the bomb safe, it exploded. A robot was incapacitated. Thousands of people were present at the rally in Paris. This would have resulted in many fatalities due to the explosion but also the subsequent chaos.”

Assadi was found guilty alongside three accomplices of trying to bomb a rally organised by the exiled National Council of Resistance of Iran on the orders of Iran’s government, a claim denied by Tehran.

Belgian police officers foiled the attack on 30 June 2018 after receiving a tipoff and stopping a couple, Amir Saadouni, 40, and Nasimeh Naami, 36, travelling in a Mercedes car in which they found 550 grams of the unstable TATP explosive and a detonator hidden in luggage in the vehicle’s boot.

Assadi was arrested the next day in Germany, where he was deemed unable to claim diplomatic immunity as he was on holiday and outside the country where he had been posted.

The court heard that Assadi had smuggled in the explosives on a commercial flight to Austria then handed the bomb over to Saadouni and Naami during a meeting in a Pizza Hut restaurant in Luxembourg two days before their arrest.

The court was shown surveillance pictures of Assadi dressed as a tourist, in a hat and with a camera, handing the Belgian-Iranian couple a package.

It is believed the target was a Free Iran rally being staged in the French town of Villepinte, north of Paris, where about 25,000 people had gathered.

Mehrdad Arefani, a former Iranian dissident based in Belgium, was found to have been an accomplice of Assadi’s who had been due to guide the couple at the rally.

He was the only defendant to agree to appear in court for the sentencing and sat impassively as he was jailed for 17 years.

Georges-Henri Beauthier, a lawyer for the prosecution, said: “The ruling shows two things: a diplomat doesn’t have immunity for criminal acts ... and the responsibility of the Iranian state in what could have been carnage.”

A spokesman for Iran’s foreign ministry told the semi-official Iranian Students News Agency last month that Assadi’s diplomatic immunity from prosecution had been violated and that he had been a victim of a western trap.