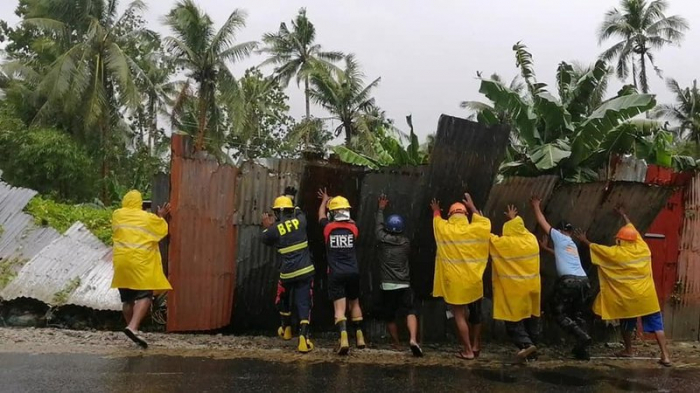 An approaching powerful typhoon has left at least one person dead, another missing and prompted the evacuation of more than 100,000 people as a precaution in the eastern and central Philippines, although the unusual summer storm is not expected to blow into the land, officials said Monday.

Typhoon Surigae was about 500 kilometres (310 miles) east of Infanta town in Quezon province on Monday afternoon with sustained winds of 195 kilometres (121 miles) per hour and gusts of up to 240 kph (149 mph). It is forecast to slowly move northwestward and then veer eastward away from the northern Philippines around Thursday.

Vicente Malano, the administrator of the government weather agency, said a high-pressure area extending from China to Japan was blocking the typhoon from blowing inland.

“We’re lucky it’s not going to make landfall because if it hits land, it’s really going to be super devastating,” said Ariel Rojas from the weather agency.

The typhoon’s 900-kilometre (560-mile) band of rainclouds and strong winds nevertheless flooded at least 22 villages and caused power outages in four provinces. More than 3,200 people and 43 ferries and cargo ships were stranded in seaports after the coast guard suspended sea travel as the typhoon blew nearer, the government disaster-response agency and the coast guard said.

A 79-year-old man died in St. Bernard town in Southern Leyte province after being hit by a falling coconut tree, the Office of Civil Defense said. Another villager in San Jose town in Northern Samar province was missing after he went to a nearby island in a motorboat to secure his farm animals, it said.

More than 29,300 families or 109,000 people were evacuated to emergency shelters as a precaution in five eastern provinces in the Bicol region, it said. Mayors said they have to open more evacuation centres to ensure social distancing during the pandemic.

“It’s really tough, it’s toxic, but we have no choice,” Mayor Ann Gemma Ongjoco of Guinobatan town in Albay province said by telephone. She said even churches were being used to shelter more than 6,100 villagers in her town, including many from communities threatened by mudflows from Mayon, one of the most active volcanoes in the archipelago.

The Philippines is a coronavirus hotspot in Southeast Asia, with health officials reporting 945,745 infections and 16,048 deaths.

About 20 typhoons and storms lash the Philippines each year. It also sits in the so-called Pacific “Ring of Fire,” a seismically sensitive region often hit by earthquakes and volcanic eruptions, making the impoverished nation one of the world’s most disaster-prone countries.