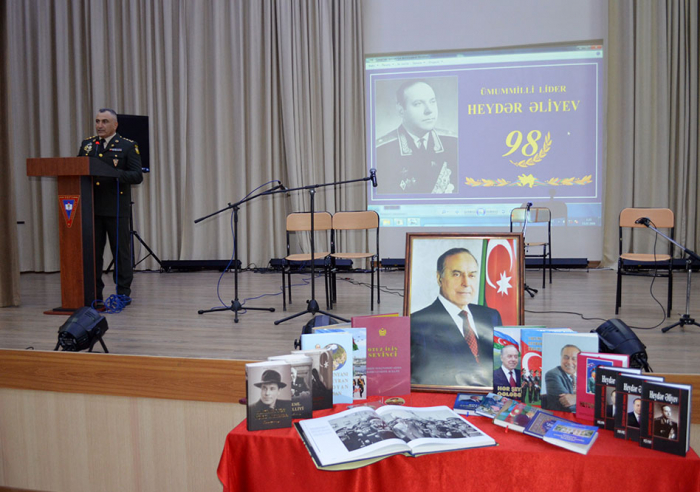 On the occasion of the 98th birthday anniversary of national leader Heydar Aliyev, the Army Ideological and Cultural Center named after Hazi Aslanov organized an event at the Military Lyceum named after J. Nakhchivanski, the Defense Ministry told AzVision.az.

First, the event participants visited the Heydar Aliyev Museum at the Military Lyceum and viewed photo stands and exhibitions reflecting the Great Leader's life and activity.

The memory of the national leader of our people Heydar Aliyev and the Shehids (Martyrs) who died for the sovereignty and territorial integrity of our country was honored with observing a minute of silence. The State Anthem of the Republic of Azerbaijan was performed.

Then a short film about the glorious life of great leader Heydar Aliyev was shown.

Speakers at the event spoke about the glorious life of national leader Heydar Aliyev, as well as about historical significance of his activities in the field of army development. It was emphasized that the establishment and formation of a strong and well-trained army with high combat readiness during the rich history of Azerbaijan's statehood are associated with the name of national leader Heydar Aliyev.

The event continued with a concert program presented by the creative team of the Army Ideological and Cultural Center named after Hazi Aslanov.