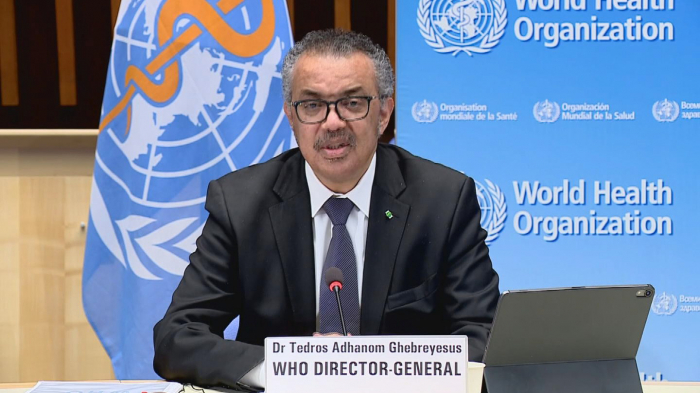 The head of the World Health Organization (WHO) has urged China to be more co-operative with the WHO's second phase of the investigation into the origins of Covid-19, AzVision.az reports citing BBC.

Dr Tedros Adhanom Ghebreyesus called for more access and transparency.
The first phase of the WHO's investigation ended in February.

It concluded that it was highly unlikely that the virus came from a laboratory in Wuhan, China, and that it probably originated in bats.

Speaking in Geneva on Thursday, Dr Tedros said the WHO needed access to raw patient data from just before and the start of the pandemic this time around.

China did not share this data with the WHO team during the first investigation, he added.

He also called for clear information about the laboratory in Wuhan, stating that as a medical professional himself, he knew accidents could happen.

This was the strongest indication yet that the WHO is still considering the lab leak theory, despite its experts saying this was unlikely, the BBC's Imogen Foulkes reports from Geneva.

Speculation about a leak at the Wuhan Institute of Virology - one of China's top virus research labs - began last year and was propagated by former US President Donald Trump.

Dr Tedros also warned against the idea that the pandemic was coming to an end.
The WHO's emergency committee said that new and more dangerous variants were expected to spread around the world.

"The pandemic is nowhere near finished," the committee warned in a statement.

Coronavirus-linked deaths in Africa surged by 43% in the space of a week, driven by a lack of intensive-care beds and oxygen, according to the WHO.