Pilgrims arrive in Mecca for 2nd hajj in COVID-19 era 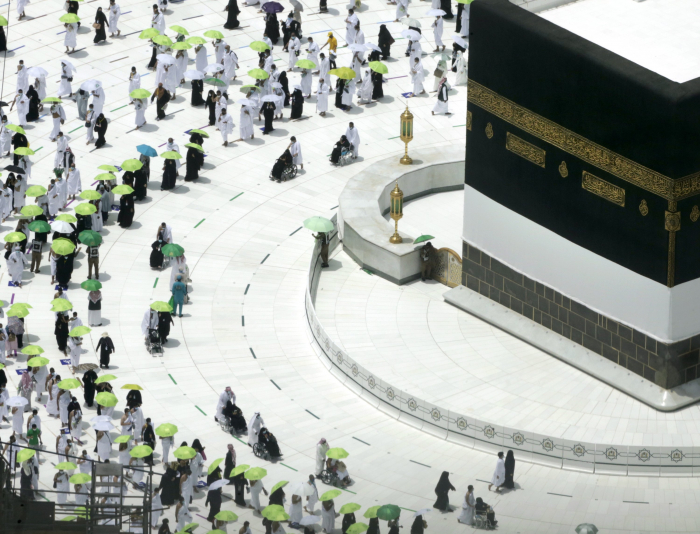 Pilgrims have begun arriving in the holy city of Mecca Saturday for the second downsized hajj during the coronavirus pandemic. Pilgrims will circle Islam's holiest site in masks and on distanced paths.

Saudi Arabia is allowing only 60,000 fully vaccinated residents to take part, seeking to repeat last year's success that saw no virus outbreak during the five-day ritual.

This year's hajj, with participants chosen through a lottery, is larger than the pared-down version staged in 2020 but drastically smaller than in normal times, stoking resentment among Muslims abroad who are barred once again.

After being loaded on buses and brought to Mecca's Grand Mosque, pilgrims began performing the "tawaf," the circumambulation of the Kaaba, a large cubic structure draped in golden-embroidered black cloth, towards which Muslims around the world pray.

Many carried umbrellas to protect themselves from the scorching summer heat.

"Every three hours, 6,000 people enter to perform the tawaf of arrival," hajj ministry spokesperson Hisham al-Saeed told Agence France-Presse (AFP). "After each group leaves, a sterilization process is carried out at the sanctuary," he explained.

The hajj, usually one of the world's largest annual religious gatherings with some 2.5 million people taking part in 2019, is one of the five pillars of Islam and must be undertaken by all Muslims with the means at least once in their lives.

It consists of a series of religious rites, formally starting Sunday, which are completed over five days in Islam's holiest city and its surroundings in western Saudi Arabia.