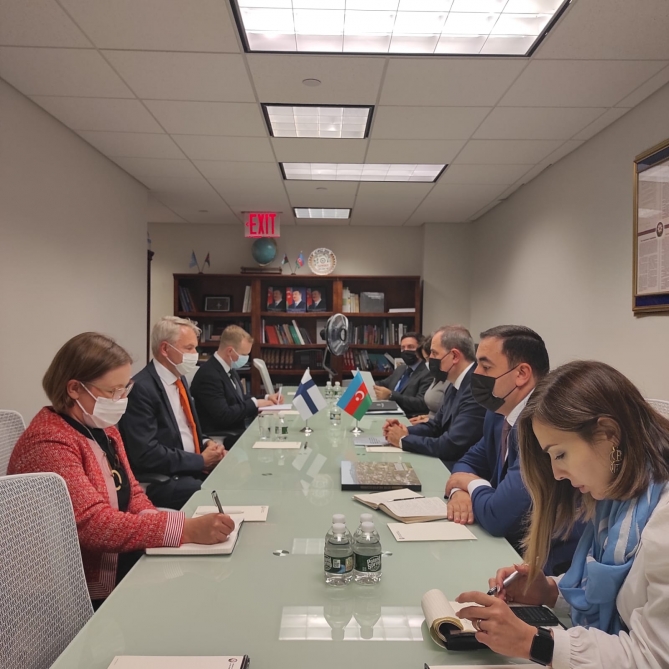 Azerbaijan`s Minister of Foreign Affairs Jeyhun Bayramov has met with the Minister for Foreign Affairs of Finland Pekka Olavi Haavisto on the sidelines of the 76th session of the UN General Assembly.

The sides expressed satisfaction with the level of development of bilateral relations and multilateral cooperation and exchanged views on prospects for expanding these ties. They also stressed the mutual understanding existing between Azerbaijan and Finland at all levels.

During the meeting, the ministers exchanged views on various aspects of the bilateral cooperation agenda, including strengthening of political, economic, humanitarian, educational, agricultural, high tech, investment, cultural cooperation, as well as regional security issues, implementation of the provisions of the trilateral statements and realization of confidence-building measures.

Minister Jeyhun Bayramov highlighted the latest situation in the territories liberated from occupation as a result of the 44-day Patriotic War, large-scale acts of deliberate destruction committed by Armenia in these territories, destruction of historical and cultural heritage, large-scale damage to the environment, as well as the threat of landmines and broadly informed Pekka Olavi Haavisto of the restoration and reconstruction process currently underway. He noted that despite decades of the aggressive policy pursued by Armenia against Azerbaijan, Azerbaijan is ready to normalize relations with the neighbouring country on the basis of the principles of international law.

The sides also exchanged views on the issues related to the cooperation within the OSCE.

Minister Pekka Haavisto said that his country is interested in expanding relations with Azerbaijan in various areas. He said that Azerbaijan’s position on the normalization of relations with Armenia is commendable and stressed the importance of implementing the Trilateral Statement.

The FMs also discussed other issues of mutual interest, including regional and international security.