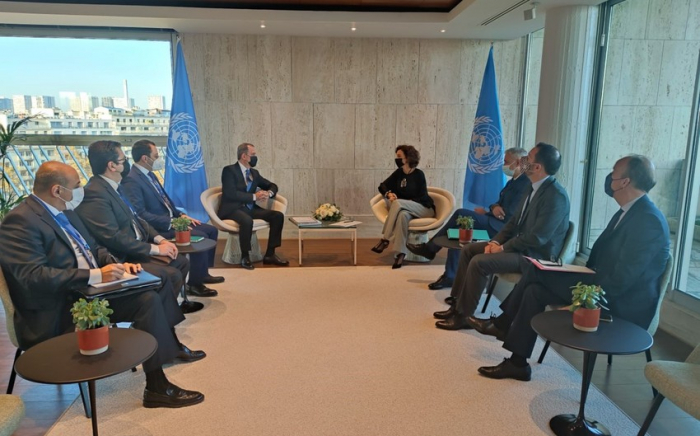 Bayramov congratulated Azoulay on her re-election as UNESCO Director-General. The minister expressed Azerbaijan’s interest in effective and comprehensive cooperation with UNESCO, and the further development of bilateral relations as one of the important partners of the organization.

The parties touched upon relations in the fields of culture, education, social and humanitarian sciences, stressing that Azerbaijan will continue its efforts to promote the organization's highest goals.

The contribution of official Baku to the promotion of intercultural and interreligious dialogue, tolerance, and multiculturalism within the framework of the World Forum on Intercultural Dialogue, known as the "Baku Process" initiated by President Ilham Aliyev in 2008, was highlighted during the meeting.

Besides, Minister Bayramov thanked the UNESCO Director-General for co-organizing the event dedicated to the 880th anniversary of the great Azerbaijani thinker and poet Nizami, held at the UNESCO Headquarters.

In turn, Azoulay thanked Azerbaijan for its constant support and expressed interest in the further expansion of the growing relations.