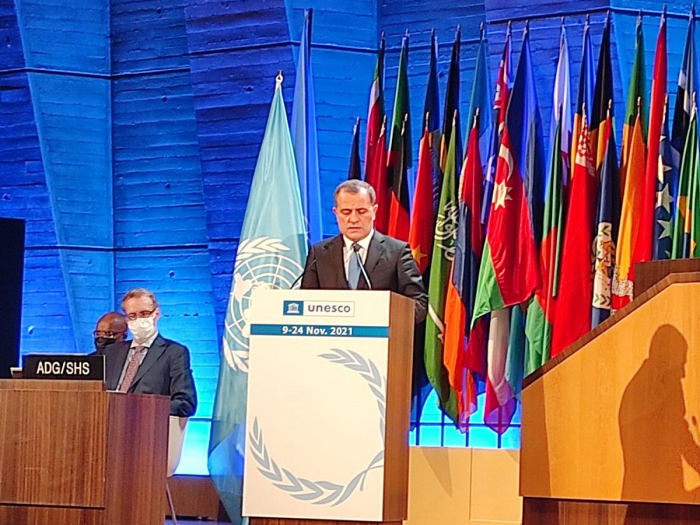 Azerbaijan in its efforts of post-conflict rehabilitation is looking forward to cooperation with UNESCO, Foreign Minister of the Republic of Azerbaijan Jeyhun Bayramov said in his statement at the General Policy Debates of the 41st Session of the General Conference of UNESCO, AzVision.az reports.

"Azerbaijan liberated its territories from the 30-years long occupation by Armenia and with the signing of the Trilateral Statement by the leaders of Azerbaijan, Russia and Armenia on November 10, 2020, the armed conflict between Armenia and Azerbaijan came to an end.

The results of the Armenian occupation were devastating. Armenia has pursued systematic policy to destroy, pillage and misappropriate Azerbaijan’s cultural heritage both in the territories it has occupied for 30 years and in Armenia itself.

During the occupation period, hundreds of cultural property have been deliberately and completely destroyed, damaged, looted and subjected to alteration with a view to changing their historical and cultural character. Out of 67 mosques, 65 have been razed to the ground and the remaining 2 were desecrated and used as stables for pigs and cows in total disrespect to the Muslim World. Thousands of museum artifacts have been illegally exported to Armenia. By all these actions, Armenia pursued far-reaching targets of removing any sign heralding their Azerbaijani origins, as an example of cultural genocide. Armenia also refuses to share the maps of the minefields, deliberately preventing the return of IDPs to the liberated territories.

It also constitutes a gross violation of international law, including UNESCO instruments, such as the 1954 Hague Convention and its Two Protocols, as well as the 1970 Convention.

In our various communications, we alerted UNESCO of these gross violations and illegal activities committed by Armenia and requested the need to dispatch a technical mission to the occupied territories throughout the past 30 years. Unfortunately, each time Armenia prevented the dispatch of this mission, which was acknowledged by UNESCO in its 2005 report.

The Government of Azerbaijan has already initiated practical steps aiming at eliminating the consequences of decades-long occupation followed by massive destruction. At the highest-level Azerbaijan declared its determination that all cultural and religious monuments in the liberated territories regardless of their origin will be duly preserved and restored. Azerbaijan will continue to build upon these ideals and values and guarantees all the rights for all its citizens, irrespective of their ethnic or religious affiliation. Indeed, Azerbaijan is home to more than 50 different ethnic groups.

Azerbaijan in its efforts of post-conflict rehabilitation is looking forward to cooperation with UNESCO. Over the past months since the end of the conflict Azerbaijan and the UNESCO have been actively engaged into dialogue with a view of dispatching a technical mission to the liberated territories. The two sides have agreed on several complex technical, legal, and political aspects of the mission, which will ensure its effectiveness and independence.

The assessment of the unprecedented damage inflicted upon our cultural heritage is a priority for our Government and we are ready to host independent technical mission as soon as possible. Unfortunately, Armenia is trying to block and politicize the mission, which is detrimental to its successful accomplishment. Armenia must refrain from interfering into this process and cease exploiting this Organization for its own political purposes," he said.