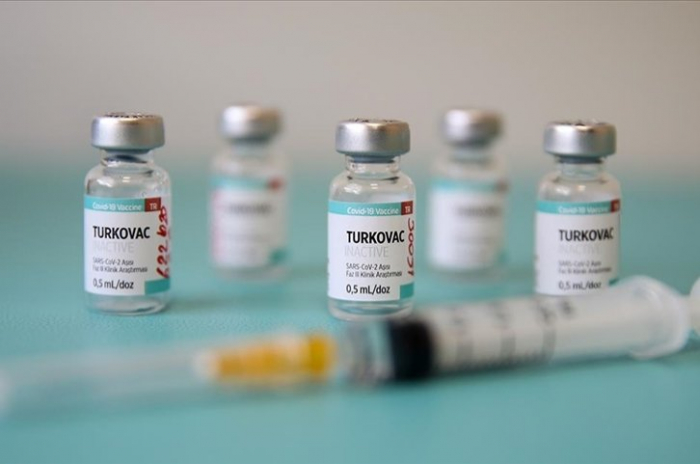 Turkey has started to give the locally developed inactivated vaccine, Turkovac, as a booster shot to those who have already received two doses of the Pfizer/BioNTech mRNA jab, AzVision.az reports citing Hurriyet Daily News.

Health Minister Fahrettin Koca previously said that for the first time in the world the recipients of an mRNA vaccine would be given an inactivated jab as a booster shot to observe how the antibody level changes.

The study will be carried out in five centers in Ankara, Istanbul and İzmir on a total of 1,034 volunteers, and this phase-two B study will last for three months, according to Ihsan Atesh, chief physician at the Ankara City Hospital, who is also the coordinator of the study.

“The Turkovac vaccine will be given to those who received two doses of the Pfizer/BioNTech jab at least 90 days ago,” he said.

Atesh also noted that toward the end of the week the homegrown vaccine will start to be given to adolescents and next week to pregnant women.

After authorities approved the local vaccine for emergency use Turkey rolled out the jab at the end of December 2021.

In its inoculation drive, which was launched in January last year, beside Turkovac and the Pfizer/BioNTech vaccines, the country is also using the inactivated shot developed by the Chinese company Sinovac.

To date, the country has administered more than 140 million doses of the COVID-19 vaccines, with over 24 million people having received a booster shot.

According to data from the health minister, more than 52 million adults, or 84 percent of the population aged 18 and over, have been double jabbed and 57 million people from the same age group have received at least one dose of the vaccine.

Meanwhile, Koca yesterday unveiled the weekly incidence rate data, measuring the number of coronavirus infections per 100,000 people, which showed a strong spike in cases in the country’s three largest cities, Istanbul, Ankara and the western province of İzmir, apparently due to the Omicron variant of the coronavirus.

In a message Koca posted on Twitter on Jan. 23, he once again urged people to show the utmost caution to protect themselves against the pandemic, calling on the public to reduce mobility during the mid-term school break.