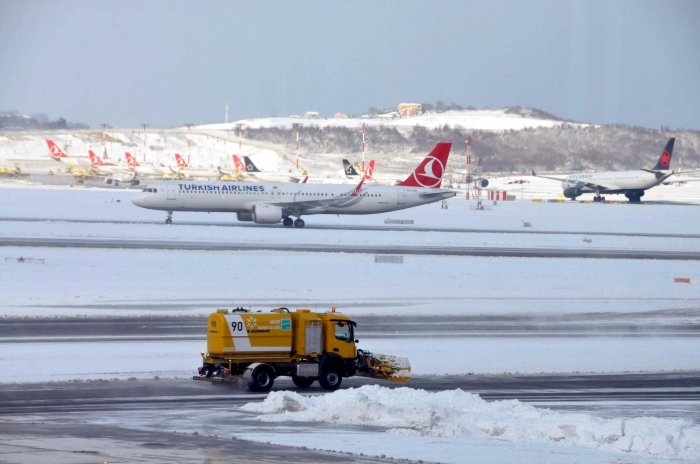 Twenty-four hours after all flights were suspended at Istanbul Airport amid heavy snowfall, a gradual restart of flights kicked off late Tuesday.

Ilker Aycı, the head of Turkish Airlines’ (THY) governing board, announced that in addition to arrival flights that resumed earlier on, departure flights also began after intense efforts against the snowstorm.

“A runway is open at the Istanbul Airport,” he told Anadolu Agency (AA). “We have started our departure flights with our wide-body aircraft,” Aycı added.

He also said that de-icing efforts are continuing.

“An arrival flight from New York has just touched down and a departure flight towards the city took off, followed by Miami, Houston, London and Atlanta flights,” Aycı said.

“We will clean up a parking area enough to accommodate 60 aircraft until tomorrow morning.”

The suspension on Monday marked the gleaming glass-and-steel structure’s first shutdown since it replaced Istanbul’s old Atatürk Airport as the new hub for Turkish Airlines in 2019.

Many parts of Turkey have been hit with heavy snowfall since the weekend, prompting authorities to shut schools in some parts of the country. Turkey’s Disaster and Emergency Authority (AFAD) has said thousands were stranded due to inclement weather.