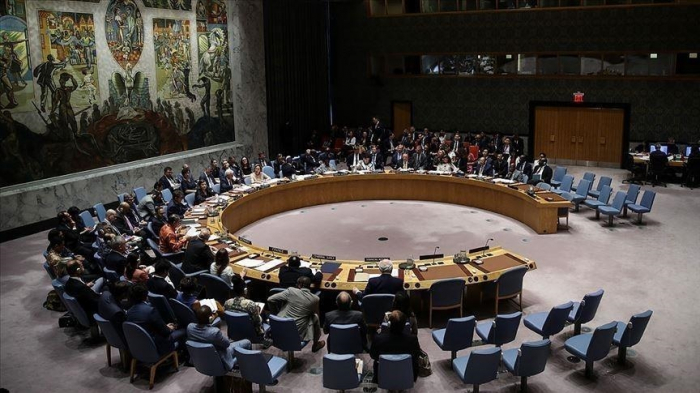 The US called Thursday for the UN Security Council to hold an open session to address the West's concerns that Russia is in the midst of preparations to invade Ukraine, AzVision.az reports citing Anadolu Agency.

US Ambassador to the UN Linda Thomas-Greenfield said the session would "discuss a matter of crucial importance to international peace and security: Russia’s threatening behavior against Ukraine and the buildup of Russian troops on Ukraine’s borders and in Belarus."

"The members of the Security Council must squarely examine the facts and consider what is at stake for Ukraine, for Russia, for Europe, and for the core obligations and principles of the international order should Russia further invade Ukraine," she said in a statement.

"This is not a moment to wait and see. The Council’s full attention is needed now, and we look forward to direct and purposeful discussion on Monday," she added.

Should the meeting transpire on Monday, it would come one day before Russia assumes the council's presidency on Feb. 1.

The US's call comes amid Western concerns of a potential Russian invasion of Ukraine, with NATO and the US saying Russia has amassed more than 100,000 troops on its border with the former Soviet Republic and is staging troops in Belarus.

In both cases, the Kremlin denies preparing for a military offensive and maintains that its troops are taking part in routine exercises.

The US on Wednesday hand-delivered a letter to Moscow rebuffing Russian demands that NATO guarantee it will not allow Ukraine to join the transatlantic alliance. That would effectively nix NATO's long-standing "open door policy," which US Secretary of State Antony Blinken said is a non-starter for the alliance.

"We will uphold the principle of NATO’s open door," the top diplomat said, maintaining it is "a commitment that we’re bound to."

"NATO’s door is open, remains open, and that is our commitment," he added.

It "allows us to count on the beginning of a serious conversation, but on secondary issues. There is no positive reaction to the main issue in this document," he said. "The main issue is further expansion of NATO to the east and the deployment of strike weapons that can threaten the territory of the Russian Federation."


More about: US   Ukraine   Russia