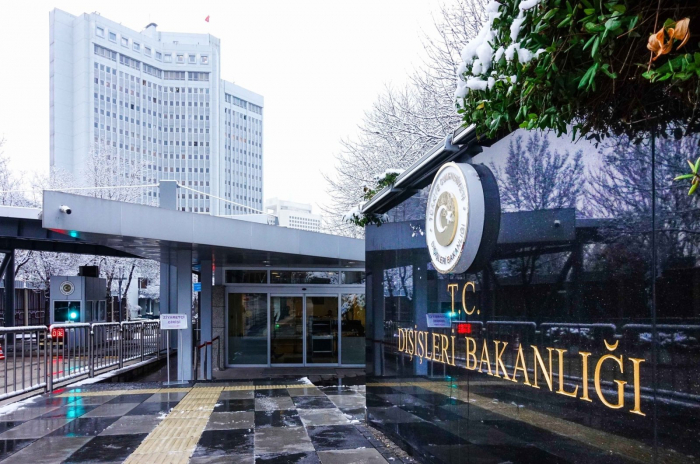 The Foreign Ministry issued a message commemorating a Turkish diplomat assassinated by an Armenian terrorist group in the U.S. in 1982, AzVision.az reports citing Daily Sabah.

"We remember with respect our martyr Kemal Arıkan, Consul General in Los Angeles, assassinated in a heinous attack by the Armenian terrorist organization JCAG in the USA on 28 January 1982," the Foreign Ministry said on Twitter.

Arıkan was killed by terrorist Hampig Sassounian and his accomplice Krikor Saliba on behalf of the Armenian terrorist group JCAG.

Sassounian was arrested and sentenced to life in prison, while fugitive terrorist Saliba is said to have been killed in the Lebanese civil war in 1982.

Last March, Sassounian was released on parole by the Los Angeles County Superior Court and was later returned to Armenia, both moves condemned by Turkey.

According to data compiled by Anadolu Agency (AA), a total of 77 people – 58 of them Turkish citizens, including 31 diplomats and members of their families – were killed in attacks from 1973 to 1986 carried out by terrorist groups the Armenian Secret Army for the Liberation of Armenia (ASALA), Justice Commandos of the "Armenian Genocide" (JCAG) and the Armenian Revolutionary Army (ARA).

The deadly campaign began in 1973 with the assassination of Turkey's Consul General in Los Angeles Mehmet Baydar and diplomat Bahadır Demir by a terrorist named Gourgen Yanikian.

ASALA was the first Armenian terrorist group to wage war against Turkey. It not only targeted Turkey, but also other countries, and it became notorious for a 1975 bomb attack on the World Council of Churches' Beirut office.

JCAG initially gained notoriety after claiming responsibility, along with ASALA, for the Oct. 22, 1975 assassination of Danis Tunalıgil, Turkey's ambassador in Vienna.

The ARA is believed to be a continuation of JCAG under a different name.

Founded in 1975 in Beirut, Lebanon, during the Lebanese Civil War, ASALA is responsible for hundreds of bloody terrorist acts. While the Marxist-Leninist ASALA not only targeted Turkey but also other countries and became infamous for a 1975 bombing on the Beirut office of the World Council of Churches, the nationalistic JCAG has only targeted Turkey because it believed that attacking other countries would damage the so-called “Armenian struggle.”

Armenian terrorist attacks intensified from 1980 to 1983, when 580 of the 699 attacks – over 80% – occurred. The attack at Esenboğa airport in the Turkish capital Ankara on Aug. 7, 1982, was one of the most notorious attacks by ASALA, as the group targeted civilians for the first time. Nine people died and over 80 were injured when two terrorists opened fire in a crowded passenger waiting area at the airport.

The 1981 and 1983 Paris attacks are among the group's other notable acts. ASALA terrorists held 56 people hostage for 15 hours during the Turkish Consulate attack in 1981, while a suitcase bomb killed eight people – most of them non-Turks – in 1983 at a Turkish Airlines check-in desk at Paris' Orly Airport. According to some Turkish officials, after the Orly attack, the group lost much of its support and financial backing from the Armenian diaspora and had to dissolve. The terrorist attacks ended in 1986, according to an Armenian study on terrorism.