Conservative dissent is brewing inside the Vatican 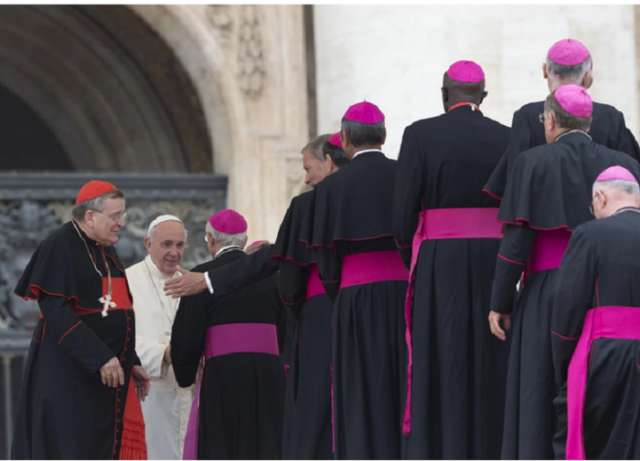 On a sunny morning earlier this year, a camera crew entered a well-appointed apartment just outside the 9th-century gates of Vatican City. Pristinely dressed in the black robes and scarlet sash of the princes of the Roman Catholic Church, the Wisconsin-born Cardinal Raymond Burke sat in his elaborately upholstered armchair and appeared to issue a warning to Pope Francis.

A staunch conservative and Vatican bureaucrat, Burke had been demoted by the pope a few months earlier, but it did not take the fight out of him. Francis had been backing a more inclusive era, giving space to progressive voices on divorced Catholics as well as gays and lesbians. In front of the camera, Burke said he would “resist” liberal changes — and seemed to caution Francis about the limits of his authority. “One must be very attentive regarding the power of the pope,” Burke told the French news crew.

Papal power, Burke warned, “is not absolute.” He added, “The pope does not have the power to change teaching [or] doctrine.”

Burke’s words belied a growing sense of alarm among strict conservatives, exposing what is fast emerging as a culture war over Francis’s papacy and the powerful hierarchy that governs the Roman Catholic Church.

Pope Francis delivers his message during the Angelus noon prayer he delivered from the window of his studio overlooking St. Peter`s Square, on he occasion of All Saints Day , at the Vatican, Friday, Nov. 1, 2013. The Pontiff has led tens of thousands of people in silent prayer in memory of African migrants who died of thirst after being stranded in the Sahara. Faithful in a packed St. Peter`s Square Friday bowed their head as the pope asked for prayers for "our brothers and sisters" who perished "from thirst, hunger and exhaustion" in the journey to try to reach a better life. Nearly 100 Africans met a grisly end in Niger after the trucks they were traveling in broke down in the middle of the Sahara before they could reach Algeria.

This month, Francis makes his first trip to the United States at a time when his progressive allies are heralding him as a revolutionary, a man who only last week broadened the power of priests to forgive women who commit what Catholic teachings call the “mortal sin” of abortion during his newly declared “year of mercy” starting in December. On Sunday, he called for “every” Catholic parish in Europe to offer shelter to one refugee family from the thousands of asylum-seekers risking all to escape war-torn Syria and other pockets of conflict and poverty.

Yet as he upends church convention, Francis also is grappling with a conservative backlash to the liberal momentum building inside the church. In more than a dozen interviews, including with seven senior church officials, insiders say the change has left the hierarchy more polarized over the direction of the church than at any point since the great papal reformers of the 1960s.

In his recent comments, Burke was also merely stating fact. Despite the vast powers of the pope, church doctrine serves as a kind of constitution. And for liberal reformers, the bruising theological pushback by conservatives is complicating efforts to translate the pope’s transformative style into tangible changes.

“At least we aren’t poisoning each other’s chalices anymore,” said the Rev. Timothy Radcliffe, a liberal British priest and Francis ally appointed to an influential Vatican post in May. Radcliffe said he welcomed open debate, even critical dissent within the church. But he professed himself as being “afraid” of “some of what we’re seeing”

Rather than stake out clear stances, the pope is more subtly, often implicitly, backing liberal church leaders who are pressing for radical change, while dramatically opening the parameters of the debate over how far reforms can go. For instance, during the opening of a major synod, or meeting, of senior bishops on the family last year, Francis told those gathered, “Let no one say, ‘This you cannot say.’ ”

Since then, liberals have tested the boundaries of their new freedom, with one Belgian bishop going as far as openly calling for the Catholic Church to formally recognize same-sex couples.

Conservatives counter that in the current climate of rising liberal thought, they have been thrust unfairly into a position in which “defending the real teachings of the church makes you look like an enemy of the pope,” a conservative and senior Vatican official said on the condition of anonymity in order to speak freely.

“We have a serious issue right now, a very alarming situation where Catholic priests and bishops are saying and doing things that are against what the church teaches, talking about same-sex unions, about Communion for those who are living in adultery,” the official said. “And yet the pope does nothing to silence them. So the inference is that this is what the pope wants.”

A measure of the church’s long history of intrigue has spilled into the Francis papacy, particularly as the pope has ordered radical overhauls of murky Vatican finances. Under Francis, the top leadership of the Vatican Bank was ousted, as was the all-Italian board of its financial watchdog agency.

One method of pushback has been to give damaging leaks to the Italian news media. Vatican officials are now convinced that the biggest leak to date — of the papal encyclical on the environment in June — was driven by greed (it was sold to the media) rather than vengeance. But other disclosures have targeted key figures in the papal cleanup — including the conservative chosen to lead the pope’s financial reforms, the Australian Cardinal George Pell, who in March was the subject of a leak about his allegedly lavish personal tastes.

More often, dissent unfolds on ideological grounds. Criticism of a sitting pope is hardly unusual — liberal bishops on occasion challenged Benedict. But in an institution cloaked in traditional fealty to the pope, what shocks many is just how public the criticism of Francis has become.

In an open letter to his diocese, Bishop Thomas Tobin of Providence, R.I., wrote: “In trying to accommodate the needs of the age, as Pope Francis suggests, the Church risks the danger of losing its courageous, countercultural, prophetic voice, one that the world needs to hear.” For his part, Burke, the cardinal from Wisconsin, has called the church under Francis “a ship without a rudder.”

Even Pell appeared to undermine him on theological grounds. Commenting on the pope’s call for dramatic action on climate change, Pell told the Financial Times in July, “The church has got no mandate from the Lord to pronounce on scientific matters.”

In conservative circles, the word “confusion” also has become a euphemism for censuring the papacy without mentioning the pope. In one instance, 500 Catholic priests in Britain drafted an open letter this year that cited “much confusion” in “Catholic moral teaching” following the bishops’ conference on the family last year in which Francis threw open the floodgates of debate, resulting in proposed language offering an embraceable, new stance for divorced or gay Catholics.

That language ultimately was watered down in a vote that showed the still-ample power of conservatives. It set up another showdown for next month, when senior church leaders will meet in a follow-up conference that observers predict will turn into another theological slugfest. The pope himself will have the final word on any changes next year.

Conservatives have launched a campaign against a possible policy change that would grant divorced and remarried Catholics the right to take Communion at Mass. Last year, five senior leaders including Burke and the conservative Cardinal Carlo Caffarra of Bologna, Italy, drafted what has become known as “the manifesto” against such a change. In July, a DVD distributed to hundreds of dioceses in Europe and Australia, and backed by conservative Catholic clergy members, made the same point. In it, Burke, who has made similar arguments at a string of Catholic conferences, issued dire warnings of a world in which traditional teachings are ignored.

But this is still the Catholic Church, where hierarchical respect is as much tradition as anything else. Rather than targeting the pope, conservative bishops and cardinals more often take aim at their liberal peers. They include the German Cardinal Walter Kasper, who has suggested that he has become a proxy for clergy members who are not brave enough to criticize the pope directly.

Yet conservatives counter that liberals are overstepping their bounds, putting their own spin on the pronouncements of a pope who has been more ambiguous than Kasper and his allies are willing to admit.

“I was born a papist, I have lived as a papist, and I will die a papist,” Caffarra said. “The pope has never said that divorced and remarried Catholics should be able to take Holy Communion, and yet, his words are being twisted to give them false meaning.”

Some of the pope’s allies insist that debate is precisely what Francis wants.

“I think that people are speaking their mind because they feel very strongly and passionately in their position, and I don’t think the Holy Father sees it as a personal attack on him,” said Chicago Archbishop Blase J. Cupich, considered a close ally of the pope. “The Holy Father has opened the possibility for these matters to be discussed openly; he has not predetermined where this is going.”