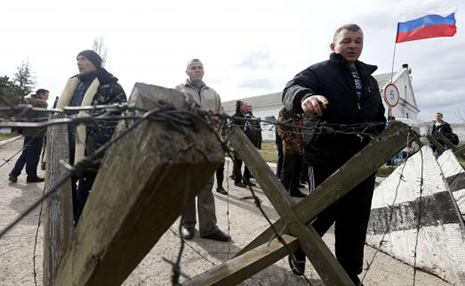 Crimea`s parliament voted to join Russia on Thursday and its Moscow-backed government set a referendum within 10 days on the decision in a dramatic escalation of the crisis over the Ukrainian Black Sea peninsula.

The sudden acceleration of moves to bring Crimea, which has an ethnic Russian majority and has effectively been seized by Russian forces, formally under Moscow`s rule came as European Union leaders gathered for an emergency summit to seek ways to pressure Russia to back down and accept mediation.

The vice premier of Crimea, home to Russia`s Black Sea military base in Sevastopol, said a referendum on the status would take place on March 16. He said all state property would be "nationalized" and the Russian ruble could be adopted.

The announcement, which diplomats said could not have been made without Russian President Vladimir Putin`s approval, raised the stakes in the most serious east-west confrontation since the end of the Cold War. Russia stocks fell and the ruble weakened further after the news.

Far from seeking a diplomatic way out, Putin appears to have chosen to create facts on the ground before the West can agree on more than token action against him.

EU leaders had been set to warn but not sanction Russia over its military intervention after Moscow rebuffed Western diplomatic efforts to persuade it to pull forces in Crimea, with a population of about 2 million, back to their bases. It was not immediately clear what impact the Crimean moves would have.

European Commission President Jose Manuel Barroso said in a Twitter message: "We stand by a united and inclusive #Ukraine."

French President Francois Hollande told reporters on arrival at the summit: "There will be the strongest possible pressure on Russia to begin lowering the tension and in the pressure there is, of course, eventual recourse to sanctions."

The new Ukrainian government has declared the referendum illegal and opened a criminal investigation against Crimean Prime Minister Sergei Askyonov, who was appointed in a closed-door session by the region`s parliament last week. The Ukrainian government does not recognize his authority or that of the parliament.

A Crimean parliament official said voters will be asked two questions: should Crimea be part of the Russian Federation and should Crimea return to an earlier constitution (1992) that gave the region more autonomy?

"If there weren`t constant threats from the current illegal Ukrainian authorities, maybe we would have taken a different path," deputy parliament speaker Sergei Tsekov told reporters outside the parliament building in Crimea`s main city of Simferopol.

"I think there was an annexation of Crimea by Ukraine, if we are going to call things by their name. Because of this mood and feeling we took the decision to join Russia. I think we will feel much more comfortable there."

Russian Foreign Minister Sergei Lavrov refused to meet his new Ukrainian counterpart or to launch a "contact group" to seek a solution to the crisis at talks in Paris on Wednesday despite arm-twisting by U.S. Secretary of State John Kerry and European colleagues. The two men will meet again in Rome on Thursday.

Tension was high in Crimea after a senior United Nations envoy was surrounded by a pro-Russian crowd and forced to get back on his plane and leave the country on Wednesday.

The EU summit in Brussels seemed unlikely to adopt more than symbolic measures against Europe`s biggest gas supplier, because neither industrial powerhouse Germany nor financial center Britain is keen to start down that road.

The United States has said it is ready to impose sanctions such as visa bans, asset freezes on individual Russian officials and restrictions on business ties within days rather than weeks.

The short, informal EU summit will mostly be dedicated to displaying support for Ukraine`s new pro-Western government, represented by Prime Minister Arseny Yatseniuk, who will attend even though Kiev is neither an EU member nor a recognized candidate for membership.

The European Commission announced an aid package of up to 11 billion euros ($15 billion) for Ukraine over the next couple of years provided it reaches a deal with the International Monetary Fund, entailing painful reforms like ending gas subsidies.

Diplomats said that at most, the 28-nation EU would condemn Russia`s so far bloodless seizure of the Black Sea province and suspend talks with Moscow on visa liberalization and economic cooperation, while threatening further measures if Putin does not accept mediation efforts soon.

They were expected to hold back from tougher steps both in hopes of a diplomatic breakthrough and out of fear of a tit-for-tat trade war with Russia, a major economic partner of Europe.

France has a deal to sell warships to Russia that it is so far not prepared to cancel, London`s banks have profited from facilitating Russian investment, and German companies have $22 billion invested in Russia.

Before the summit, European members of the Group of Eight major economies will meet separately, diplomats said, in an apparent effort to coordinate positions towards Russia, due to host the next G8 summit in Olympic venue Sochi in June. They have so far stopped participating in preparatory meetings and Canada has said G7 countries may meet soon without Russia.

The crisis began in November when Ukrainian President Viktor Yanukovich, under strong Russian pressure, turned his back on a far reaching trade deal with the EU and accepted a $15 billion bailout from Moscow. That prompted three months of street protests leading to the overthrow of Yanukovich on February 22.

Moscow denounced the events as an illegitimate coup and refused to recognize the new Ukrainian authorities.

Russia kept the door ajar for more diplomacy on its own terms, announcing on Thursday a meeting of former Soviet states in the Commonwealth of Independent States (CIS), including Ukraine, for April 4 and saying it would be preceded by contacts between Russian and Ukrainian diplomats.

Lavrov said attempts by Western countries to take action over the Ukraine crisis via democracy watchdog OSCE and the NATO military alliance were not helpful.

In a move that may alarm some of Russia`s neighbors and the West, Russian Prime Minister Dmitry Medvedev announced steps to ease handing out passports to native Russian speakers who have lived in Russia or the former Soviet Union.

Putin has cited the threat to Russian citizens to justify military action in both Georgia in 2008 and Ukraine now.

After a day of high-stakes diplomacy in Paris on Wednesday, Lavrov refused to talk to Ukrainian Foreign Minister Andriy Deshchitsya, whose new government is not recognized by Moscow.

As he left the French Foreign Ministry, Lavrov was asked if he had met his Ukrainian counterpart. "Who is that?" the Russian minister asked.

He stuck to Putin`s line - ridiculed by the West - that Moscow does not command the troops without national insignia which have taken control of Crimea, besieging Ukrainian forces, and hence cannot order them back to bases.

Kerry said afterwards he had never expected to get Lavrov and Deshchitsya into the same room right away, but diplomats said France and Germany had tried to achieve that.

Western diplomats said there was still hope that once Lavrov had reported back to Putin, Russia would accept the idea of a "contact group" involving both Moscow and Kiev as well as the United States and European powers to seek a solution.

The European Union formally announced it had frozen the assets of ousted Ukrainian president Yanukovich and 17 other officials, including former prime minister Mykola Azarov, suspected of human rights violations and misuse of state funds.

In an awkward coincidence as EU leaders were gathering in Brussels, German Economy Minister and Vice-Chancellor Sigmar Gabriel traveled to Moscow for talks with his Russian counterpart and Putin.

Reflecting concern about how the long-planned trip might be seen in the midst of the Ukraine crisis, Gabriel dropped at the last minute plans to take along German industrialists with him. Germany has been accused in some quarters of soft-pedaling on sanctions in the light of its close economic ties to Russia.

Outside of Crimea, in eastern and southern cities that saw big pro-Russian demonstrations, the tide of public opinion appears to be turning in favor of Kiev.

Ukrainian police cleared pro-Moscow demonstrators who had been holed up in the regional parliament building in Donetsk and raised the Ukrainian flag where the Russian one had mostly been flying since Saturday.

Pro-Kiev demonstrations are now much larger than pro-Moscow ones in the city, home town of ousted leader Yanukovich.

Putin has said Russia reserves the right to intervene militarily in other areas of Ukraine if Russian interests or the lives of Russians are in danger.

"As Russia spins a false narrative to justify its illegal actions in Ukraine, the world has not seen such startling Russian fiction since Dostoyevsky wrote, `The formula "two plus two equals five" is not without its attractions,`" the State Department said in the document.