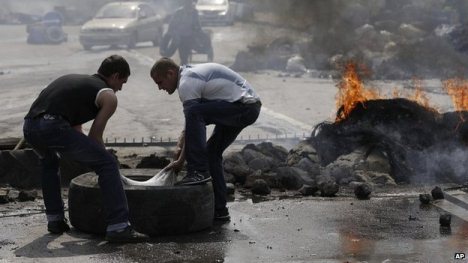 Fears of an impending offensive by Ukrainian forces are growing in the pro-Russian stronghold of Sloviansk, sources inside the city say.

Ukraine`s army cut off the main road into the city on Sunday, squeezing its hold on rebel fighters.

A reporter inside Sloviansk told the BBC that residents expect the city to be stormed.

Last week, rebels shot down two Ukrainian helicopters on the outskirts of Sloviansk.

Harriet Salem, a freelance journalist in Sloviansk, said there is strong support for the pro-Russian fighters in the city.

But she added that residents are increasingly anxious that troops sent by Kiev will try to retake the city centre.

Ukrainian troops are currently carrying out what the Kiev government calls "anti-terror" operations in the east to wrest control of government buildings from pro-Russia separatists.
Speaking two days after dozens were killed in violence in the Ukrainian port city of Odessa, Ukraine`s Prime Minister Arseniy Yatsenyuk accused Russia of executing a plan "to destroy Ukraine and its statehood."

Several thousand supporters of a united Ukraine, some of them masked and carrying sticks, rallied in Odessa late on Sunday before marching to the regional police headquarters.

They sang the national anthem as they marched to the trade union building to re-deploy the Ukrainian flag that had been burned by pro-Russians on Saturday.