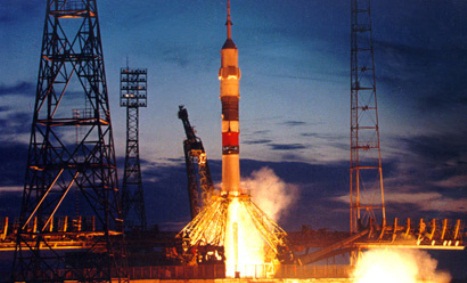 "In order to ensure conditions for a launch, the order allows presence of foreign experts at Baikonur Cosmodrome`s facilities," the web-site said.

Carrier rocket Soyuz-2 with Fregat booster will be used for the launches of Russian Meteor-M No. 2, MKA-FKI (PN2) and DX-1, British TDS-1 and UKube-1, Canadian M3Msat, Norwegian AISSat-2 and U.S. SkySat-2, according to the order.

To ensure launches of these spacecrafts Russian Defense Ministry is allowed to use space systems and complexes for military purposes and to attract personnel of military units.

"The spacecraft are not targeting military objectives and customers of the launches confirmed this fact in written form. They are designed for the earth remote sensing, scientific experiments and automatic identification of ships," the document says.

The Baikonur Cosmodrome is the world`s first and largest operational space launch facility. It is located in the desert steppe of Kazakhstan. It is leased by the Kazakh government to Russia (currently until 2050). Under the current Russian space program, Baikonur remains a busy space port, with numerous commercial, military and scientific missions being launched annually.