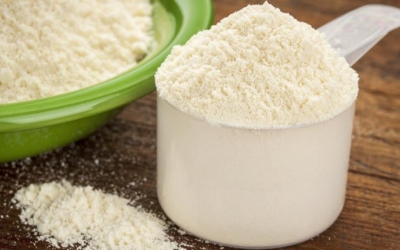 Typically used among weight-lifting gym goers who hope to increase muscle mass, whey protein may also be beneficial for diabetics, a new study finds. That’s because it could abate the blood sugar (or blood glucose) spikes that they normally experience after meals, Medical Daily reported.

With so many of us eating some form of carbohydrates in our meals — and not only in rice and bread — the chances of our blood sugar levels spiking afterward are pretty high. Although this is fine for healthy people, whose pancreases produce enough insulin to counter those spikes, diabetics need medication or insulin injections. The researchers discovered, however, that whey protein may be able to help them manage their blood sugar levels, and even help with increasing insulin production to an extent.

The reason this works comes from whey’s ability to encourage production of glucagon-like peptide-1 (GLP-1), which is a hormone in our digestive tracts (the gut) that stimulates the production of insulin.

Along that same vein, the researchers of the current study tested 15 patients with controlled type 2 diabetes. On two separate days, they were given 50 grams of whey in water or a placebo 30 minutes before eating a breakfast characterized by a high-glycemic index, meaning that it was more likely to affect blood sugar and insulin levels. Basically, it included three slices of white bread and a jelly high in sugar content. The patients’ blood was also tested at different times, starting with when they took the whey protein, and then at 15 minutes after eating, 30 minutes after eating, and every 30 minutes thereafter.

Because they all took the whey on either the first or second day, the researchers were able to see exactly how their glucose and insulin levels were affected by the whey. By the last blood test, at 180 minutes, the researchers found that blood sugar levels were down by 28 percent after patients took the whey. Meanwhile, insulin response increased by 105 percent and C-peptide responses, which indicate insulin production, were increased by 43 percent. But perhaps most importantly, early insulin response — about 30 minutes after the meal — after consuming whey was 96 percent higher than when the patients took a placebo. This was important because diabetics need insulin the most immediately after a meal.