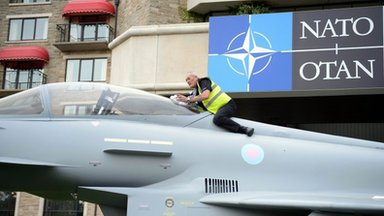 Western leaders have criticised Russia for its "destabilising" influence on the crisis in Ukraine, at the start of a Nato summit in Wales.

Nato and the UK warned that pressure on Russia would be increased if it did not change course in eastern Ukraine.

Ukraine`s president is to brief US and EU leaders on earlier discussions on a ceasefire plan with Russia`s President Vladimir Putin.

Some 2,600 people have died in fighting between Ukrainian troops and rebels.

The West says it has evidence that Mr Putin is supporting the separatists with training and arms, but Russia denies this.

The conflict has forced more than a million people from their homes in eastern Ukraine, according to latest United Nations estimates.

The two-day Nato summit in Newport will be dominated by the crisis in Ukraine.

But leaders are also set to discuss the rise of Islamic State (IS), and Afghanistan where Taliban militants launched a deadly attack on a government compound on Thursday.

Writing in the Times, UK Prime Minister David Cameron and US President Barack Obama said they would "confront" IS, warning their countries would "not be cowed by barbaric killers".

Their statement comes following the release of a new IS video showing the killing of US journalist Steven Sotloff, just days after the group beheaded another American reporter, James Foley.

"We are still witnessing unfortunately Russian involvement in destabilising the situation in eastern Ukraine," he told journalists in Newport on Thursday ahead of the summit`s official launch.

Mr Cameron stressed pressure of sanctions was "the right way to tell the Russians that what they are doing is unacceptable".

The BBC`s Bridget Kendall says the summit is Nato`s most important for decades, as leaders faced the question of whether the alliance is equipped to deal with 21st century challenges.

The alliance is expected to approve plans to create a rapid response force composed of several thousand troops from member states, able to deploy within 48 hours.

European leaders are also set to discuss a new round of tougher economic sanctions on Russia.

The challenge from Moscow is two-fold. Russia is, firstly, overturning the post-Cold War security order in Europe... set out in the Nato-Russia Founding Act of 1997.

This document, signed in Paris by Nato leaders and then-President Boris Yeltsin, set out to build "a lasting and inclusive peace in the Euro-Atlantic Area".

It contained an explicit requirement to respect the sovereignty, independence and territorial integrity of all states. Nato`s view is that Russia`s behaviour in Ukraine is a blatant breach of the principles contained in the Founding Act.

Secondly, Russia willingness to back separatist forces and to nibble away at the territory of countries that used to be part of the Soviet Union has revived fears among Nato members which border Russia, especially Poland and the Baltic republics.

The principal task of this summit is to try to reassure worried Nato members and to send clear signals to Moscow about Nato`s resolve.