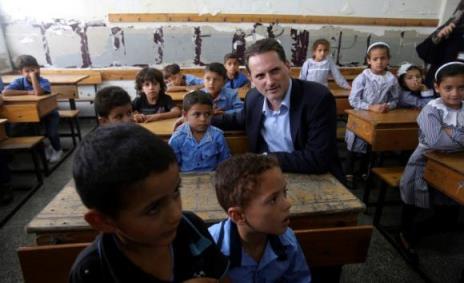 Some 500,000 children returned on Sunday to school in the Gaza Strip, where many will be given psychological counseling before regular studies begin after a devastating 50-day war between Palestinian militants and Israel.

The opening of the school year had been delayed for three weeks because of damage to more than 250 schools and the use of about 90 U.N. educational facilities as shelters for tens of thousands of residents displaced by fighting, the United Nations and local authorities said.

"The top priority now is making sure that after a period of psychosocial support, including the use of theater for development techniques, our students can return to their regular curricula," said Pierre Krähenbühl, head of the United Nations Relief and Works Agency, which runs more than 200 Gaza schools.

He said UNRWA has employed over 200 counselors who would engage with the approximately 240,000 students in its schools, with a transition to standard studies scheduled in a week.

A coalition of international and local non-government agencies and the Palestinian Education Ministry will also help provide psychosocial support to another quarter-million students in Gaza`s public schools.

Health officials in the Gaza Strip, an enclave run by the Hamas Islamist group, said more than 2,100 people, mostly civilians were killed, among them 500 children, in the war.

Israel, which launched its Gaza offensive on July 8 with the declared aim of halting cross-border rocket fire, said 67 of its soldiers and six civilians, including a four-year-old boy, were killed.

At a girls` school in Shejaia, a Gaza neighborhood where hundreds of houses were damaged or destroyed and 72 people died in fierce fighting, a sign bearing the name of a student killed in the conflict was placed symbolically on an empty chair.

The head teacher, addressing the morning assembly in the bullet and shrapnel-scarred school, told the students that her deputy also had been killed.

Israeli schoolchildren, who began their studies as scheduled on Sept. 1, six days after an open-ended truce went into effect, spent summer vacation under rocket attack from Gaza that disrupted daily life in many Israeli communities.

Psychological help is also available to them in schools.

Zeyad Thabet, Gaza`s deputy education minister, said 26 schools in the territory were destroyed during the war.

On Thursday, a report by the New York-based Human Rights Watch group accused Israel of committing war crimes by attacking three UNRWA-run schools, killing 45 Palestinians, including 17 children, in or near those facilities.

Israeli government and military spokesmen declined comment. But during the fighting, Israel rejected preliminary Human Rights Watch findings that it committed war crimes and said the group should focus on Hamas putting Palestinian civilians in harm`s way by using residential areas as launching points for attacks and for weapons storage.

The United Nations acknowledged that weaponry was found at three of its Gaza schools - not the same facilities that were the subject of the Human Rights Watch report - and condemned militants for storing arms there.

UNRWA said some 64,000 refugees were still being housed in 20 Gaza schools.