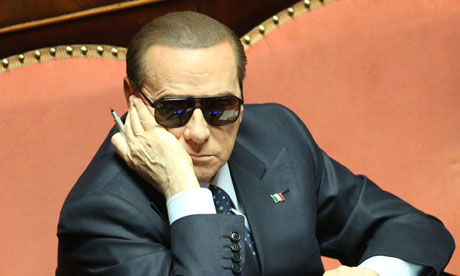 Former Italian prime minister Silvio Berlusconi`s tax fraud conviction and four-year prison sentence were upheld on the first appeal on Wednesday in a case that could see him barred from public office for five years.
In Italy, defendants are legally considered innocent until all appeals are exhausted and Berlusconi`s lawyers are expected to appeal the case to the nation`s highest court of cassation once the reasoning for the decision is published.

The ruling, which comes just days before prosecutors wrap up closing arguments in his sex trial, raises the question of whether Berlusconi`s days as a political force are numbered.

His centre-right forces are allied with the Democratic party in a grand coalition and, although Berlusconi holds no governmental posts, he remains influential. It was his decision to head the centre-right coalition, after initially saying he would move aside for younger leaders, that gave a boost to his forces in February`s election campaign, finishing a close second to the centre-left.

"My opinion is that a personality who had such a relevant role in Italy for 20 years – absolutely controversial, evidently, but relevant – cannot be eliminated by judicial means, but by political means," Stefano Folli, a political commentator for il Sole 24 Ore newspaper said on La7 private TV. If the high court upholds the guilty verdict and ban, "it`s clear he would exit from the scene" and lose his seat in parliament.

The Five Star Movement party founded by comic-turned-political leader Beppe Grillo is pressing to apply the judicial ban on public office immediately. Italian media reported that cheers went up in a party meeting when the verdict was announced.

The case already is tightly tied to Berlusconi`s political fortunes. He announced he was stepping aside just two days before the October lower court verdict convicting him in a scheme that allegedly involved inflating the price his Mediaset media empire paid for TV rights to US movies and pocketing the difference. Shortly after the guilty verdict, he renewed his political campaign and his lawyers began seeking a series of trial delays for his electoral commitments.

Berlusconi has long denied the tax fraud charges – as well as wrongdoing in any of the dozens of cases that he has faced over the past two decades, mostly for his business dealings.

Berlusconi appeared prepared for the ruling, going on his Mediaset TG5 news on Tuesday night to proclaim his innocence and portray the case as a political witch-hunt against him, designed to "eliminate a political adversary".

The ruling also bars him from managing any company for three years. Even if the jail sentence is confirmed, it is unlikely Berlusconi would serve any time for the tax fraud case because a furlough shaving three years off the sentence would likely be applied and one-year sentences are not normally served.

In the Mediaset case, prosecutors allege Berlusconi and other defendants were behind a scheme to purchase the rights to broadcast US movies on Berlusconi`s private television network and falsely declared the payments to avoid taxes. They said the defendants then inflated the price for the TV rights of 3,000 films as they relicensed them internally to Berlusconi`s networks, pocketing the difference amounting to about €250m.

His defenders argue he was head of the government during the period covered by the charges and was not involved in the day-to-day running of Mediaset.

In its ruling, the appeals court also upheld the not guilty finding against Mediaset chairman Fedele Confalonieri.

Berlusconi has been convicted in other cases at the trial level. But the convictions have always either been overturned on appeal or seen the statute of limitations run out before Italy`s high court could have its say.