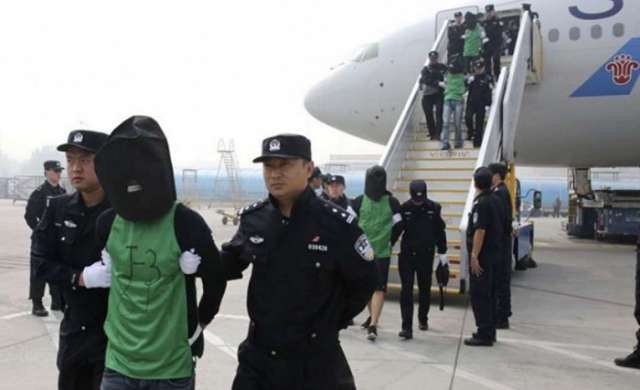 Taiwan`s government has lodged a protest after the Armenian government deported 78 Taiwanese suspected of telecom fraud to China, the latest flare-up in tensions between China and Taiwan over such deportations.
Taiwan has been angered by several incidents this year in which countries around the world, including Kenya, Cambodia and Malaysia, have deported Taiwanese wanted on fraud charges back to China, rather than to Taiwan.

China considers Taiwan to be part of its territory, and most countries have diplomatic ties with Beijing rather than Taipei and officially recognise that Taiwan is a part of China.

The suspects were arrested when Armenian police raided six locations on Aug. 20, seizing a large amount of equipment including computers and smart phones, Xinhua said.

China`s Public Security Ministry sent a team to Armenia to deal with the issue on Aug. 26, the report added.

Taiwan`s Mainland Affairs Council, the island`s top China policy-making body, said it had expressed deep regret and a strong protest to China at the move.

China has said previously it has a right to extradite these people as they are suspected of defrauding Chinese nationals and have caused great distress and harm.

Xinhua said the Armenia-based fraudsters "had been falsely presenting themselves as law enforcement officers to extort money from people on the Chinese mainland through telephone calls".

They have cheated people out of more than 7 million yuan ($1.05 million), it added.

China has informed Taiwan about the case, Xinhua said.