`We Both Agree: Assad Needs To Go` 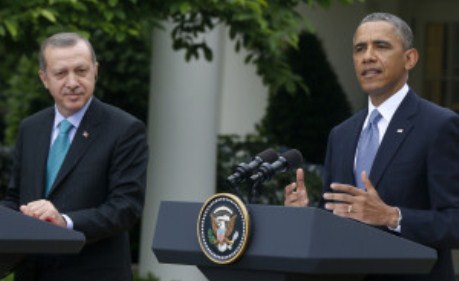 President Barack Obama said Thursday that the U.S. and Turkey will keep ramping up pressure to oust Syrian President Bashar Assad from power, but there`s "no magic formula" to stop his violence.
At a news conference with Turkish Prime Minister Recep Tayyip Erdogan in the White House Rose Garden, Obama says the only way to resolve the crisis is for Assad to hand over power to a transitional government.

"We`re going to keep increasing the pressure on the Assad regime and working with the Syrian opposition," Obama said. "We both agree that Assad needs to go."

Erdogan says the U.S. and Turkey have overlapping goals when it comes to Syria. Neither leader mentioned that the U.S. and Turkey remain far apart on just how to handle Syria`s bloody civil war. Erdogan did not directly answer a question about what he asked from Obama on Syria.

Obama said the United States can`t act alone to bring peace to Syria and needs the cooperation of international partners.

"There`s no magic formula for dealing with an extraordinarily violent and difficult situation like Syria," Obama said.

Erdogan is visiting Washington just days after two car bombs in Turkey killed dozens in the deadliest terrorist attack there in years. Turkish authorities have blamed Syrian intelligence, and Erdogan has been calling for more aggressive steps to topple Assad`s government. Obama extended condolences for what he called the "outrageous bombings" and said the United States stands with Turkey in fighting terror threats.

But the Obama administration remains reluctant to take the kind of action Turkey would like to see, including establishing a no-fly zone in Syria.

The disagreement was unlikely to spoil a day of pomp for Erdogan, who arrived at the White House under the flags of a U.S. military honor guard lining the north driveway. He met with Obama in the Oval Office for three hours focusing largely on Mideast security issues, but Obama said they also agreed to create "a new high level committee" to focus on increasing trade and investment between the two countries.